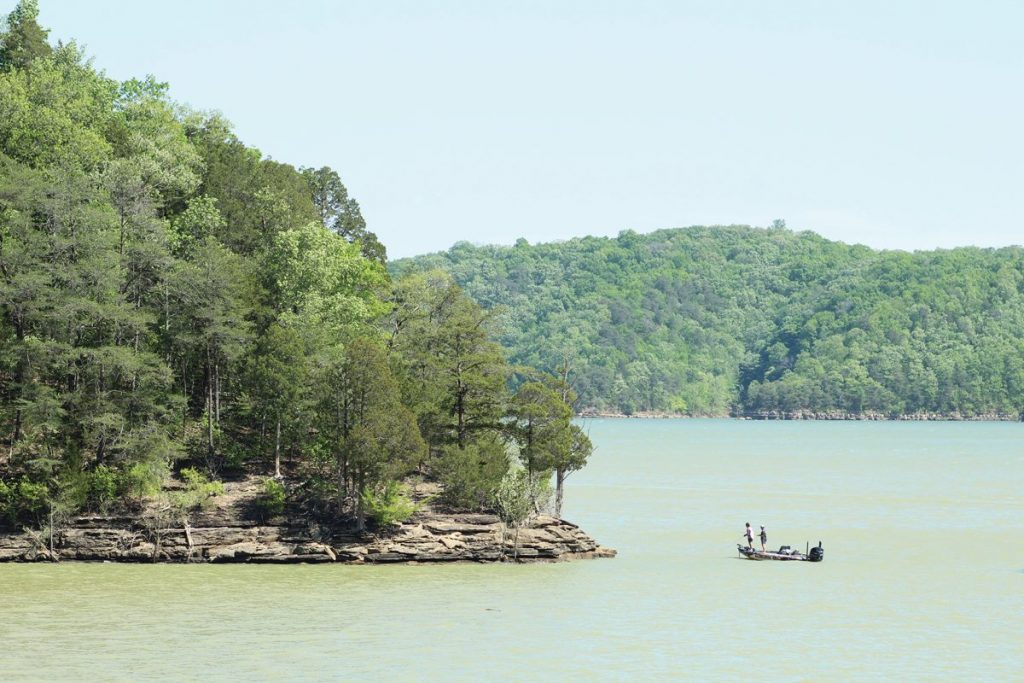 College anglers come in from across the nation

The event, hosted by the Russell County Chamber of Commerce and State Dock brought in 450 college anglers from 21 states and the District of Columbia, all of whom came out to Russell County to compete for prizes, prestige, and a place in the Carhartt Bassmaster College Series National Championship which will take place later this year. 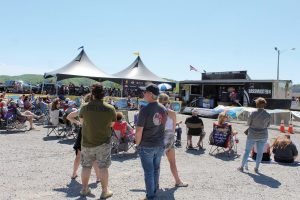 Liberty University’s one-man team of Jack Dice was the overall winner. Dice hauled in the five-bass limit both Friday and Saturday for a total weight of 32-08, catching six smallmouth bass and four largemouth. His was one of only 13 one-person boat in the field of 225 teams.

The top 10% of finishers qualified for the college series, including sophomore Hayden Scott and junior Griffin Fernandes of Adrian College (Mich.)

“We’ve been here the last three nights,” Scott said. Adrian College is in southeastern Michigan, about an hour from Detroit and 30 minutes from Ann Arbor. “The drive’s not terrible. We’re used to driving to Alabama, Florida, or Oklahoma, so this drive is an easy trip, only about six and a half hours.”

Even with the practice time getting to know Lake Cumberland, the anglers found getting the fish to bite was tough. “Even today was a bit of a grind, we just got fortunate. We put what each of us found together and ran our plan and fortunately it worked. We started the morning with a smallmouth bite and as soon as the sun came up and it heated up the bushes, we moved to the back of the creek to catch the largemouth that were moving up to spawn.” 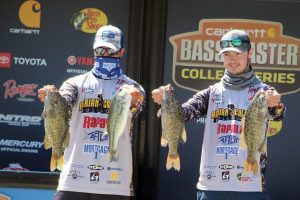 The pair plan their time out around understanding the commonalities between the lakes, water temperature and fish behavior. “We like to line the smallmouth up in the morning and catch them in a feeding window,” Fernandes said. “With the largemouth, this lake sets up very similar to Monroe Lake in Indiana, which is my home state, and this time of year they get up in those bushes and you just follow them into the backs of the creeks.”

The team with the shortest drive out to Lake Cumberland were the commuting Campbellsville Tigers, whose team of Tanner Barnes and Jordan Smallwood qualified for nationals (the site of the collegiate nationals has not yet been determined) with a two-day haul of 25-13, finishing eighth overall.

CU graduate assistant Travis Hunt was happy to have the event so close to home. “I’ve been with the team since it first started about seven years ago,” Hunt said. “We travel all over the country from Texas to Florida, the Carolinas, all over the place.”
Hunt grew up in the area and was a region champion bass fisher at Taylor County High School before starting school at CU.

“Most of our anglers are full-time students and they fish when they can, but we have a good program. We put a lot of time and effort into getting these kids a chance to fish. The Carhartt Bassmaster Series is one of the three big college series that they have throughout the country. Bassmaster is the most notable and they put on a great tournament.” 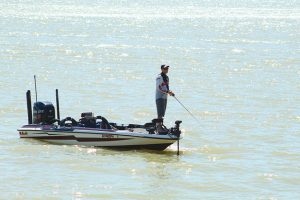 Hunt was also out with the CU anglers last fall when they came out for Bassmaster. “We want to thank the people of Russell County for helping get this tournament and putting it on. We’re one of the local teams and we greatly appreciate them having this big tournament right here in our backyard on one of our home reservoirs.”

Nine of CU’s 10 teams made weigh-ins over the weekend.

Another regional angler out was Tennessee Tech senior Will Schibig. Will had a 3-05 smallmouth on Friday and finished with a total haul of 7-06. “This is my first time out on Lake Cumberland,” Schibig said. “We’re situated between two lakes that are really similar to it, with Center Hill and Dale Hollow, so I’m used to this type of reservoir. Still, we didn’t have a lot of practice time because of finals, so we didn’t get a chance to find the spots.”

Shibig was down on Monday and Thursday for practice fishing, but was still splitting time between Cumberland and Cookeville, Tenn. Without as much practice time, Shibig relied on his experience in Dale Hollow to help inform his decision-making on day one, something that he said ultimately held him back. 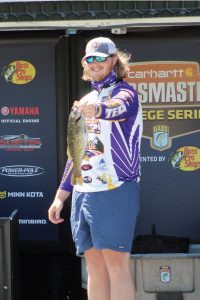 Tennessee Tech’s Will Shibig with his 3-05 keeper. Shibig was one of many anglers in from the area who appreciated having an event so close to home.

“As much as it looks like Dale Hollow, it fishes much differently,” he said. “This time of year, I’d go to backs of creeks and find quality fish, but there were a lot of non-keepers out there.” In all, Shibig said he and his partner Nate Lesch caught about 15 fish on day one that they threw back in.

With Shibig were Volunteer fishers Robert Gee and Chase Dawson, who finished 19th overall, qualifying for nationals with a two-day haul of 22-14. This was Dawson’s first trip out to Lake Cumberland, but Gee had been down for last fall’s tournament.

“I like it a lot better in the spring than I did in the fall,” said Gee. “The fish are great out here and it’s such a cool lake to be around. It’s kind of like the Grand Canyon, it’s so deep and clear.”

“It is a beautiful lake. The fish are definitely in here, they’re just being stubborn right now. We’ve just got to keep grinding.”

Cade Rudiger and Cooper Thor from Stephen F. Austin University in Nacogdoches, Texas, finished 45th overall with a two-day catch of 18-09. “This was my first time in Kentucky, and I loved it,” said Thor. “This lake is really cool. I’ve never seen another lake like it where it’s deep throughout the entire lake and there are a lot of fish out here.”

“The hard part is catching the keepers,” said Rudiger. “We went through about 30 fish, but they weren’t to size. Most of what we found was in the backs of creeks and even mid-creeks, where the water was still clear with the gates open. The main lake got so dirty that they weren’t biting that well.”

“This morning we caught them a little different and adjusted as the sun came up,” Thor said.

One team that experienced a jump from day one to day two was the pair of Ryan Phillips and Austin Polly of Morehead State. Coming out of the first day, the pair had only managed a 3-03 keeper, but on day two they came back with a three fish catch of 6-14. 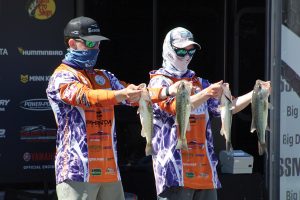 Being from Morehead, both Polly and Phillips are familiar with Lake Cumberland. “It’s been a tough day,” Polly said Friday. “We found some fish and struggled to get them to bite and we broke off some of the ones that did.” The pair worked shallow waters throughout the day Friday. “We had a bit of a delay with the fog, probably 20 minutes, but once they let us go it wasn’t too bad. We left some fish out there and hopefully we can catch them tomorrow.”

“We had a good gameplan coming in,” said Phillips, “we just couldn’t get the fish to bite. If we had, we’d be sitting pretty good right now.”

The pair did bounce back to finish in the top half of anglers, and like their competitors from Campbellsville, loved having such a major event so close to home. 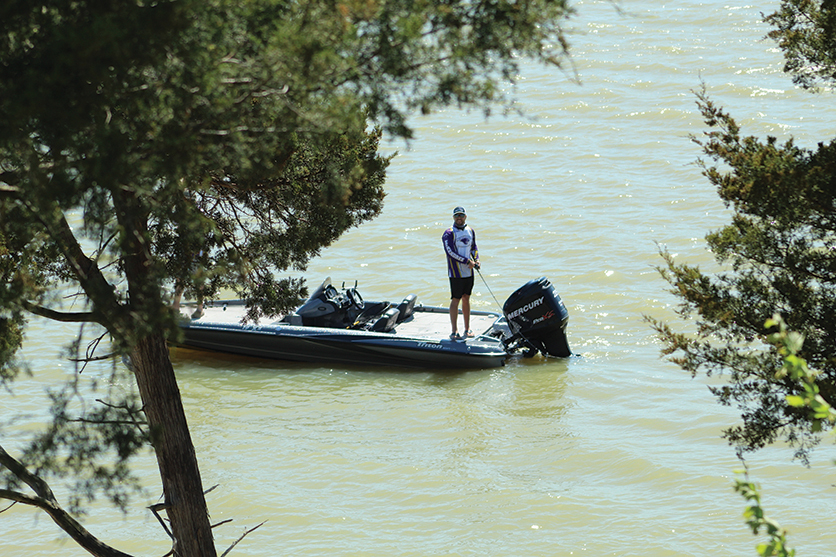