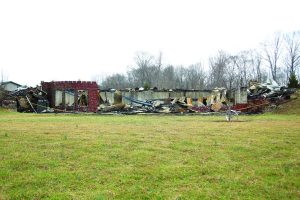 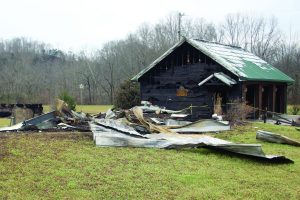 Sarah Turner is a hunting guide, mother of two, and proprietor of the largest female owned hunting outfitter in the United States. In 2019, Sarah established the Triple Crown Outfitters Hunting Lodge in Creelsboro, Kentucky, to not only welcome those who would come to Russell County in search of the kind of expeditions offered by TCO, but as a home for herself and her children. Since then, the lodge has hosted some of the biggest names in the hunting industry, in addition to becoming a destination for fishing groups, all girl’s youth hunting events, weddings, and family reunions.

As she was arriving home last Tuesday evening however, Sarah found everything that TCO had worked so hard to establish in Creelsboro over the last few years on the verge of going up in flames. Greeted by the wail of the lodge’s fire alarms and the distressed mewing of Opal, the family’s beloved cat, Sarah dropped her grocery bags and ran toward the sound, when she noticed a light in the basement. Reaching the bottom step, she could see that flames had already begun to engulf the lower level of the structure, and grabbing Opal, ran back upstairs. As soon as her feet had landed on the top step, Sarah says, she felt a sudden gust of hot air hit her back, and knew it was time to get out of the lodge.

Finding her way back outside, Turner called for emergency services around 9:50, after telling her son to remain in their vehicle, and placing Opal safely inside as well. The 911 operator on the other end of the line told Sarah that help was on the way and instructed her to get to a neighbor’s house until assistance could reach her. Hesitantly, Turner says, watching what was her dream burn, she pulled away, the last time she would see her home and business standing. Members of the Russell County Fire Department worked vigilantly to get a hold on the situation, but said the fire was intensified by the house’s wooden construction.

Unfortunately, the Turner’s home was completely devastated, leaving little but charred rumble in place of what was once the grandeur of the Triple Crown Outfitters Hunting Lodge. Turner says she has yet to receive the report from the state Fire Marshall but believes the fire may have somehow begun in her daughter’s room, who was visiting with friends at the time of the fire. Despite this, Turner continues to express how blessed she feels in the face of Tuesday’s tragedy saying, “All I can tell you is that I was able to get our pet out and that none of us were hurt. We have a very long road ahead, but we have a roof over our heads, clothes on our backs, and food on the table. With that being said, I know that we are blessed, and I am thankful.”

Sarah also noted how truly humbled she had been from the outpouring of love and support from the hunting and outdoors community across the nation, and even South Africa and Canada. Being born and raised in eastern Kentucky, Turner says she grew up in a community where sportsmen came together to help one another and that throughout this loss she has been reminded of what it is to be a part of such a broad and amazing family, united by a true love and passion for the outdoors. On the future of Triple Crown Outfitters in Creelsboro, Sarah responded resiliently and without hesitation, saying:

“The Future of TCO has certainly never been a question. Although we lost our home, our lodge, and where this company took root, it’s not the end. This company is strong and has proven time and time again that it can overcome any obstacle. You see, here at TCO, we don’t just hunt. We make memories, friendships, and family that no fire can ever take away. My staff and I will continue to lead the way in the outfitting industry, and through hard work and dedication, will make this our best season yet.”