When Elly Richardson was nine months old she was diagnosed with right side hemiplegic cerebral palsy. “It was from a uterine stroke,” Courtney Richardson, Elly’s mother, said.
Elly’s condition hadn’t been detected earlier because babies simply do not yet have the motor skills on either side to reveal that type of motor deficiency sooner. “She would always fist with her right hand as far as reaching and grabbing things went,” Courtney said.
The condition would hamper Elly’s physical development, she didn’t walk until she was two and even then, it was with the aid of an orthotic brace on her right side. The brace itself was cumbersome, and Courtney and her husband Ryan would have to buy Elly two pairs of shoes any time she needed one. The first pair was for her natural size on her left foot and the other was a size and a half or two sizes bigger to accommodate the brace.
“And we always had to buy tennis shoes, tennis shoes were the only shoes she could wear with her brace,” Courtney said.
Elly’s right arm was likewise encumbered and to treat it the Richardsons travelled to Louisville to see Dr. Laura Jacks, a pediatric orthopedic surgeon at Kosair Children’s Hospital. Together, they began a treatment called corrective casting where Elly’s left arm was casted from finger to elbow in order to train her brain to make more use of her right arm.
The treatment oscillated in six weeks cycles over a three-year period.
“She will always have a delay on her right side, she walks with a bit of a limp,” Courtney said. “You can tell her right side is much smaller.” On top of that treatment, Elly would also go through rounds of Botox treatment on her right side, from her shoulder to her feet to try and enhance the flexibility of her muscles, which would tighten up from their lesser use.
When Elly was in third grade she had surgery to lengthen the Achilles tendon on her right side and coming out of that operation her surgeon suggested aqua therapy to help Elly rehabilitate.
“We did some physical therapy at Russell County Physical Therapy, they had a pool there and they worked with her, but with her diagnosis she always had a balance issue,” Courtney said.
Eventually, the Richardsons got Elly swim lessons. 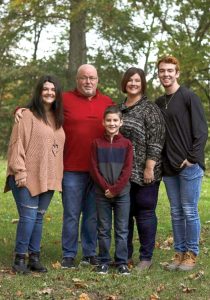 “We were at the ANC one day and Coach Debbie Loy approached us and told us that she was going to put Elly on the high school swim team.”
“She had participated in other sports and activities, but they were too taxing on her body,” RCHS swim coach Glenda Prater said. “Debbie said send her, and then Jordan Loy, Debbie’s daughter, worked with Elly and it began.”
“She took Elly under her wing and we are eternally grateful to her for that,” Courtney said. “It made a world of difference.”
“Her time was never going to be the best, but Debbie wouldn’t let her slack, she pushed her,” Ryan Richardson said. “Any time Elly thought she couldn’t go any harder, Debbie would be in her ear saying, ‘Yes, you’re going to.’”
For the first two years Elly swam for Russell County, Coach Debbie allowed her to use fins. While it meant a disqualification every time Elly went into the water to compete, it helped boost her confidence to get into the lane and compete.
Then, when Elly was in fifth grade, Russell County had a meet against Taylor County and the fins came off ahead of Elly’s run in the 50 yard freestyle. “That caused some anxiety, but she swam the event unassisted,” Coach Prater said. “Her parents cried. Her teammates cheered and Coach Debbie high-fived her in the end.”
The two loudest parts of any Laker swim meet are the final length of a tight race and when Elly makes her final push in the 100 yard butterfly.
While the backstroke is perhaps the easiest stroke on Elly and the freestyle the quickest for navigating through a race, the butterfly is brutal for any swimmer. It requires timing and power from the core to the toes in order to push through its dolphin kick. That kick must be strong enough lift the swimmer’s upper body out of the water so that they can begin their wide sweeping arm stroke. 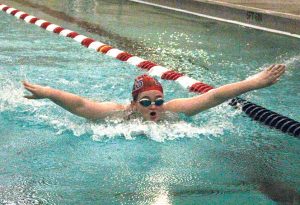 The butterfly requires power throughout the stroke and is one of, if not the most difficult stroke to swim. Photo by Drew Bergman

Barely 15 swimmers in Region 3 do the 100 yard butterfly, so Coach Debbie decided that Elly would. With the smaller pool of swimmers willing to fight through that stroke, Elly could qualify for the Region 3 championships and earn points for her team, which.
“There are times where it’s almost like you have to help pull her out of the pool, she’s so exhausted,” Ryan said. “It takes every bit of energy she has.”
“Elly encourages the team daily by showing up and swimming like we do,” said senior Camryn Woodrum. “She inspires us to keep going when she swims with the battles she faces. Even if she is not swimming she still shows up to encourage us in the pool.” Camryn also swims the 100 butterfly thanks to Elly. “I did not want to do the event, but she encouraged me to push through, saying we could do it together.”
A few years ago Elly received the 110% award at the Laker swim award banquet and the remark was made that she would win it every year, having already won it several times. It was then decided that the award be renamed the Elly Richardson 110% award, and that Elly would not only present the award at the banquet, but also help decide who would receive the award.
So far three swimmers: Hailey Howard, Ally Stephens, and Morgan Jones have won the award.
“Elly and I have been the best of friends since we started swimming together,” Morgan said. And because of that I have seen first hand her intense dedication and drive. In the last six years we’ve shared many laughs, tears, and killer practices, but she has never once made an attempt to quit.
“She is bright and bubbly from the moment she steps onto the deck. Her smile is contagious, and her faith is exemplary. Ellie is such an inspiration not only to me, but also to swimmers across the state. She has defied so many obstacles to get to where she is today and I could not be more proud to call her not only my teammate, but also my friend.”

Elly Richardson’s path has not been easy, but it has enriched everyone who has come to know her. Photo courtesy Courtney Richardson

As an extension of her passion and person in the pool, Elly also teaches swimming to children three-years-old and up. As an expression of her faith, Elly is fond of mission work, having helped communities in Wilmington, Del. and New Bern, N.C. She attends Jamestown Christian Church with her family where she sings on the praise team, is involved with the youth group and also works with the children’s ministry.
Marlei Devore, a seventh grader on the swim team said that Elly helped her overcome her initial nervousness swimming with the high schoolers. “When I got there Elly made jokes and was super nice. She is always super funny and she tries to help when I have no idea what is going on. I am super lucky to be in her lane.”
“The swim team and the parents have always rallied around Elly and pushed her to be the best,” Courtney Richardson said. “She will never be the fastest, but she will always give her best. We couldn’t ask for a better swim family.”
Elly keeps constantly busy. Apart from her responsibilities at school and at the ANC and JCC, she is also involved in FFA, the Y-Club, and the National Honor Society.
“Elly is awesome to be around. Her smile is infections, she laughs all the time,” said Gaby Alvizo, who is signed on to swim at Virginia Methodist University. “Her presence on the team is important for everyone. Every meet Elly does her best and you can see it. She beats her times. She might be the last person swimming, but she doesn’t give up. Everyone cheers for her.”
“Elly encourages me with her positive attitude and how hard she works,” said Emma Rae Phillips, who recently signed to swim for Milligan University. “We will be at practice and I will be so tired and ready to be done, but I’ll keep swimming because she is still trying and working even though she’s in pain almost every day.”
“She will continue to have hip and back pain throughout her life, and possibly need future surgeries,” said Courtney. “She is a fighter and doesn’t even realize it. To her, it’s just the norm. She is a social butterfly, beautiful inside and out, intelligent, strong-willed, and stubborn young woman. We are so blessed that God chose us to partner with him on raising her.” 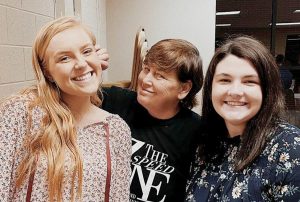 Courtney remembered the day they drove home from Louisville, having just learned of Elly’s diagnosis. “We made a decision together that we weren’t going to be the poor pitiful Ellyson, we were going to push her to be the best that she could be at whatever. We tried everything trying to find her niche,” she said. “Swimming just fit.”
Something Coach Debbie once told Elly still rings true and will as long as Russell County swim exists and as long as the 110% Award keeps its namesake: “I don’t care if you are in last place every time,” Coach Debbie had said. “You are an inspiration to everyone and that means more than first place.”