On Thursday and Friday of last week, rain, sleet, and ice fell across southcentral Kentucky prompting schools that had been in session to go online. By Saturday many roads were back to normal, but it was a short break.

On the evening of Valentine’s Day this Sunday a wintry mix came through, giving the area an icy sheen and by Monday ice fell like rain before a light snowfall late Monday night into Tuesday morning.

Governor Beshear, the Kentucky State Police, and many other state and local agencies encouraged people to stay off the roadways as much as possible.

“We’ve been through too much,” Governor Beshear said. “We’ve sacrificed too much. We have the capability to work remotely more than ever before, so take care of one another. Check on your neighbors, especially if you lose power, and you have seniors or if you have those who are tougher to reach or might have tougher needs. Be a good neighbor. I know you’ve done it for the last 11 months. Let’s do it for the next week, and we will take care of each other.”

Kentucky Transportation Cabinet Secretary Jim Gray added, “What we’re facing is three winter storms in eight days. This next round of winter weather will bring varying conditions across the state, but what remains constant is our crew’s commitment to maintaining mobility along critical routes and our plea to the public to avoid unnecessary travel.”

Road crews are out, but with the wave upon wave of winter weather, they continue to fight an uphill battle to keep even the busiest and most essential roadways (major highways and those leading to hospitals) safe.
“Crews worked throughout the day yesterday treating and plowing routes focusing primarily on priority A routes [see Snow and Ice Priority Routes],” said Amber Hale of the Kentucky Transportation Cabinet’s District 8 out of Somerset. “While some crews were able to begin addressing B and C routes yesterday afternoon downed trees and power lines created hazardous conditions, prompting District officials to have crews focus only on priority A routes through the overnight hours for the safety of crew members.

“Crews will remain out in force today, plowing and treating roads and removing downed trees. However, due to the large amount of downed trees needing to be cleared and low temperatures making roadways harder to plow it will be some time before all roads are clear.”
As of Monday evening, over 500 Russell Countians were without power. RECC crews were out working and as of this writing, power has been restored to approximately 120 of those. Most of the outages in Russell County are reportedly in the Jabez community east of Lake Cumberland near Pulaski and Wayne Counties. 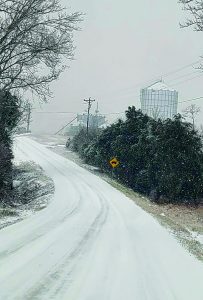 Ice and snow made road conditions hazardous for most of the week with road crews struggling to keep up as one storm came right after another.

Outages are affecting all of the counties in the SKRECC system with Wayne, Pulaski and McCreary Counties showing the most outages.

The majority of the outages have been due to tree limbs. Ice adds a great deal of weight to tree limbs and power lines, causing the limbs to snap and fall on the lines, breaking them.
Restoration, which began around 3:30 yesterday continues. SKRECC crews have been working nonstop. The ice storm, which continued after restoration began, made it difficult to make any progress. Every time a section of line would be restored, additional outages would be reported. Road conditions, as well as ongoing weather conditions, have slowed restoration tremendously.

The co-op hopes it can make good progress today. In addition to SKRECC crews, contract crews are assisting, and more crews from sister co-ops in Kentucky, as well as from out-of-state, are expected to arrive today to help with restoration efforts.

South Kentucky RECC CEO Ken Simmons says this was a rough storm, and he truly appreciates the patience and kindness the members are showing during this major outage situation.