Four people per Laker and three per Cardinal were on hand last Tuesday night as Russell County opened the season hosting Taylor. Among those on hand was State Senator Max Wise who has a son on Taylor County’s team.

“I think it’s just great for the parents, players, coaches, and community to see some normalcy back,” Senator Wise said. “I think sports play an integral role in so much of the learning experience for young people and just for them to have an outlet and something right now during COVID to look forward to and participate in. I’m so excited for everyone in this community and everyone to be able to play a part tonight.”

The return saw a pair of hard-fought games as the teams knocked off some early-season rust with Russell County splitting the night as the shorthanded girls fell 38-24 while the boys overcame a first half deficit to win 58-54.

The Lady Lakers fell behind early and spent their opening night fighting to stay in pace with the visiting Lady Cardinals. Russell County is young again this year with their only upperclassmen being seniors Juliah Bault and Star Marcum, and junior Sophie Shearer. Marcum and Shearer did not play opening night.

They faced an experienced Taylor County team that knew just how to frustrate the Lady Lakers.

“We didn’t really have any problems, we’re just young,” Coach Brett Blankenship said after the game. “Taylor County returned everybody, they have a lot of seniors, I’m playing eighth graders and freshmen.”

Behind Juliah Bault’s 10 points, 4 rebounds, and 3 steals, the team got its key contributions from eighth grader Rachel Bolin (5 points, 3 rebounds), and sophomores Mallory Ferguson (6 points, 1 rebound), and Maleah Preston (2 points, 3 rebounds). Sophomore Hannah Yates had 6 rebounds but was unable to score against Taylor County. “She’s got to work harder to get the ball, we’ve got to work harder to get it to her,” Coach Blankenship said after. “It’s just being young and making young mistakes.” 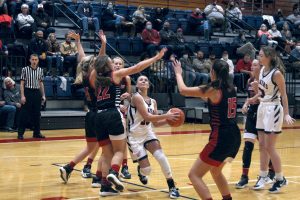 An area where those young mistakes showed up most apparently was in the shooting splits. The Lady Lakers shot 25 times from beyond the arc and only seven times inside it. “We can’t shoot 25 threes in a game and expect to win.”

While many of the shots were open, the Lady Lakers are not a three point-heavy team, their players do better inside and attacking, but the experienced defensive play of the Lady Cards invited Russell County to shoot outside again and again, playing away from their strength. In the fourth quarter, after Juliah Bault drove inside for an and-one opportunity, Coach Blankenship told her to keep driving, something the Lady Lakers will need to continue doing as their team and their season comes together.

“Winning a game at the varsity level is tough,” head coach Billy Carson said after the game, “anytime you can get a win you’re pleased.”

The teams spent much of the first quarter testing each other out. Seniors DaVonte Grayson and Scott Hamm led the team through those first awkward minutes, with Grayson opening and closing the quarter’s scoring and Hamm showing early aggressiveness.
Bolstering the frontcourt presence was junior Jay Milburn who had four first-quarter rebounds to prevent second chances for Taylor County.

The teams and the scoring loosened up in the second, jump-started by senior Clay Anderson’s three-pointer off the bench. With the experienced front court leading the way and keeping the game tight, Coach Carson took the chance to check out the younger players.

The Lakers returned five starters from last year’s team, but last year’s senior class also made up a heavy part of the team’s overall rotation. And though the game was tight throughout, Coach Carson still used the opening night as a chance to see what his team, including his bench, could do. Ten different Lakers saw action on the floor opening night, and all were looking to prove themselves worthy of rotation minutes behind the top six.

“From the get-go I’m just looking to see what guys are capable of. You won’t know until you throw them into spots and see,” Coach Carson said. “I thought everyone that went in there did something to contribute.”

The Lakers looked good with 17 seconds to go in the half, down four, but a Garyson Layup as the clock expired had them looking even better going into the half. The Lakers opened the third quarter with a 15-5 run including 10 unanswered points to take a 38-29 lead. Hamm, Grayson, and Milburn continued working inside and Milburn even contributed a three from the wing as part of that stretch. 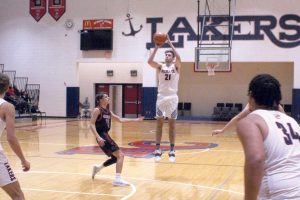 Jay Milburn scored 16 points (including this third quarter three) and collected 10 boards for the opening night double-double for the Lakers.

The Lakers put the game on ice in the fourth quarter, getting points where they needed them and turning around the poor foul shooting run that started with a minute left in the third and finally abated with two minutes left in the game. During that stretch, the Lakers missed eight of their ten free throws, after it the team combined to make 7 of 12 to secure the four-point win.

Jay Milburn led the team in scoring with 16 points, 7 rebounds, 3 assists and 2 blocks. DaVonte Grayson was a rebound shy of a double-double, scoring 13 and pulling down 9 boards. Scott Hamm was the third Laker in double figures with 13 points and 6 rebounds. Clay Anderson had 9 points off the bench.

“I told them before the game, it’s not going to be easy and you’re not going to play perfect. That’s one of our mantras, you’ve got to handle adversity together. Bad stuff is going to happen, it’s how you respond to it.”