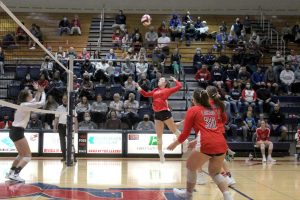 Freshman Briley Murray (22) and Senior Evan Hoover (30) led the Lady Lakers with 8 kills apiece including this one.

On Monday night the Russell County Lady Lakers volleyball team won their opening round Region 4 matchup against District 15 Champion Allen County-Scottsville 25-20, 25-15, 25-16.
The win comes off the Lady Lakers’ own district championship tournament where they defeated Metcalfe County 25-18, 25-18, 27-25, before falling to Clinton County in straight sets.
“We were really disappointed with that loss because we know we could have done way better than we did,” senior Evan Hoover said following the win over ACS. “We know that we are a better team than that district performance and we can go far in the region. Knowing that is what kept us motivated.”
The Lady Lakers showed that belief early on in the game. When the Lady Patriots went up 3-0 to start the first set, it seemed as though tonight may be another case of Russell starting slow and falling behind early. 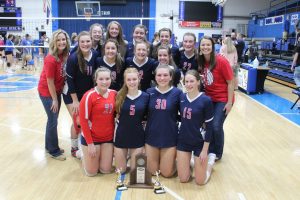 Russell County volleyball with their District 16 Runner-up trophy. Seniors Kylee Roy (5) and Evan Hoover (30) were given all-district honors at the conclusion of the tournament.

“We’ve had many games where we had a slow start and that came back to bite us, costing us a set, or ultimately sometimes a match,” head coach Faith Womack said. “We’ve gotten over that hump and a lot of that is coming mentally ready and that clearly showed tonight, from the very first whistle we were ready to go.”
The 3-0 run stopped with a powerful kill from Hoover from the left side of the net. Ashton Baird came in with a block which scored the next point, and she came back with another one shortly after to tie the game at 4. It was the last time the Lady Lakers trailed that night.
“We knew that Allen County-Scottsville was going to be a big presence on the net,” Coach Womack said. “They have some pretty tall girls who are a threat and we made sure that we were ready and prepared to be defensively ready on the net.”
The teams laddered their scores up through the middle of the first set, with ACS calling their first timeout following an ace from Abby Loy that caught the Lady Patriots out of position and put Russell up 12-7. Coming out of the timeout, ACS was able to tie the game at 12, but that was their last sustained run of the night. 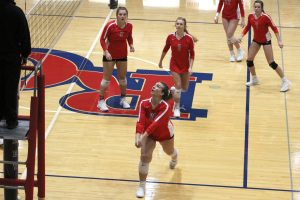 Evan Hoover keeps the play alive in the first set as Russell County found their rhythm against the Lady Patriots.

“That was important for us, coming off the runner-up finish in the district,” Coach Womack said. “I saw some fire tonight above anything I’ve seen from them all season long and I’m really proud of the way they played. Everyone was mentally focused and ready to do their job, whatever that meant at any given time.”
The Lady Lakers stretched the score to 19-15 when ACS threatened their final time, scoring three quick points to bring the game to 19-18, and again Russell County found themselves facing another ghost of the season: putting teams away.
An ACS strike went wide and Kylee Roy aced the next serve, forcing ACS into a timeout down 21-18, but there would be no rally coming out of the break. Abby Loy aced another serve and Evan Hoover hit a cross-court kill to put the set away 25-20.
“They came with fire and determination,” Coach Womack said. “We’ve prepared specifically for this team, we beat them earlier in the season at their place, so I think we had more confidence coming into this. I couldn’t be proud.”
In the second set, the team hit their stride, opening on a 4-1 run. Lauren White helped direct the offensive attack and started racking up assists on her way to 23 on the night–her second-highest assist total of the season.
One of the primary beneficiaries of White’s passing was freshman Briley Murray, who along with Hoover, scored a team-high eight kills Monday night.
Murray, likewise, was pleased with the way her team came together Monday night. “I think at the beginning of the season we struggled more to play as a team, but tonight we really were good together,” she said. 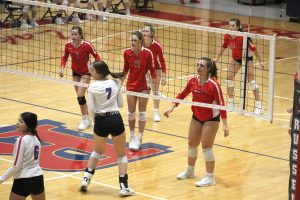 The Lady Lakers fell down 3-0 early, but after tying the first set at 4, never trailed again.

The Lady Patriots managed to tie the second set at eight, but Russell County answered with a 10-2 run with Roy and Loy acing serves and Lauren White setting up her teammates seemingly at will. Hoover capped off the run with a hussle block at the edge of the net to put the Lady Lakers up 18-10.
“We were just ready to come out and show everybody what we’re made of,” she said. “It really helps that we were on our home court and we had a lot of people come out that hadn’t been to a game all year. The atmosphere made a big difference.”
The Lady Lakers went up 23-11 and finished off the set 25-15.
There was no letup in the third set as the Lady Lakers cruised to a 25-16 victory with White continuing to direct traffic and the team keeping the ball off the floor. Abby Loy and Kylee Roy led the squad with 16 of the team’s 33 digs.
“I think we did a lot of extra little things right,” Coach Womack said. “I’ve tried to drive the point home that hussle and communication make everything else fall into place and I feel like tonight we did that.”
The Lady Lakers are peaking at the right time and with more people entering the gymnasium for the regional tournament, home court is finally starting to feel like home court.
“Everyone please come out and support us,” Evan Hoover said. “We’ll be playing Greenwood they’re a super competitive team, so if we can get everyone out, that would be awesome.”
The regional semifinal match against Greenwood is scheduled to start at 5:30 this evening.