The Russell County Bass Fishing Team participated in the Mossy Oak Fishing Bassmaster High School National Championship presented by Academy Sports + Outdoors last week.
The weather didn’t cooperate much and the teams all faced a struggle with the lake being lower than usual for this time of year pushing many of the bass that they would usually be aiming for into areas that they would not normally be found.
Lucas Wray and Will Stephens, a team that has already shown their angling skills by competing in the Mossy Oak Bassmaster’s High School Nationals last year did not disappoint in this year’s tournament.
“We missed the top-12 cut by two keeper fish or one really good fish,” said coach Shannon Stephens. Even with the difficulties faced throughout the tournament “they finished in the top 25 which would put them in the top 10 percent of fishermen at the tournament and the top one percent of fishermen their age in the country, so they had nothing to be ashamed of.”
Stephens noted that “with over 250 boats on the water this is an impressive two days of fishing.” T 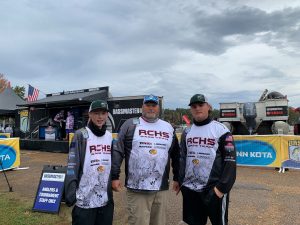 he pressure of that many people angling for the same keeper fish to win the tournament will make things more difficult for even the best fishermen and mixing that with the cooler temps the fish can often change their feeding and bedding habits.
Coach Stephens expressed, “The boys gave it their best effort and fished hard. I was proud of the effort they put in. Considering there were 70 to 80 boats that didn’t even catch a fish they showed well.”
Wray and Stephens were able to hold onto their position with losing almost a half a day of fishing due to weather and their boat bottoming out three hours into the day.
Coach Stephens was happy to say that “they fought hard and did everything that anyone could ever ask of them.”
With another tournament coming up this weekend on Green River the team is hoping to have their boat ready, currently the boys are in second place for angler of the year in that tournament series with two more events to be fished. If they can secure angler of the year, they will go back to the nationals next year, but the competition is stiff.
“Overall, the entire Russell county team is fishing hard and doing well this year,” coach said. “I am just glad the kids can still be out on the water and enjoy life during all this crazy year.”