On June 8, 1966 Private First Class Avery G. Smith of Russell County was killed in action defending a column of over 150 United States soldiers from a Viet Cong ambush along Highway 13 at Ap Tau O. That road would come to be known as “Thunder Road” for all of the attacks that occurred along its path. Four months later his family was presented with his Distinguished Service Cross, the second highest award the United States can bestow, for Avery’s selfless and heroic actions in defense of his column.

Last week we looked back at Avery’s time before the war with his family on the farm. This week we will look at what life was like for Avery during his six months in Vietnam.

Were someone to tell you to close your eyes and picture the Vietnam War many images would certainly come to mind: Huey helicopters flying low over the jungle canopy, dropping platoons of infantrymen off into combat zones; those infantrymen patrolling quiet in the jungle carrying M16s; in the sky A-4 Skyhawks and F-4 Phantoms fly over endless expanses of green; that green burning red and black with napalm.
Few would immediately picture the cavalry units who worked in constant support of the ground and air forces.
“We supported artillery, we supported transportation, we supported the infantry, we supported the combat engineers. If we weren’t all out, there was at least one of our platoons out,” said Robert Corbin, a maintenance man and M60 operator with the 2nd Platoon, 4th Cavalry Regiment, 1st Infantry Division in Vietnam. 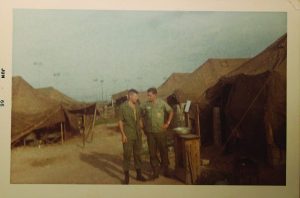 In a photo simply dated “Jun 66,” Avery Smith is photographed with Richard Keesler.

“Cavalry’s work, armor’s work, wasn’t really thought of until they needed us,” said Richard Keesler, also of the 4th Cavalry Regiment. “We would have security for whomever, the patrols, whatever was needed. When the choppers would bring in the infantry, we’d already be there with a perimeter set up, and we’d set another one up for the infantry when they left.”
Officially nicknamed the “Quarterhorse,” of the “Big Red One,” the 4th Cavalry has been in service since 1855 is one of the most storied forces in the history of the American military.
There, Avery G. Smith of Kentucky met Robert Corbin of Missouri and Richard Keesler of Indiana, two men who would help carry his memory home.
Richard had been the first of the three men to arrive, coming in just around Thanksgiving of 1965, around two weeks before Avery and about two months before Richard.
Richard had trained to be an MP, but as soon as he arrived in Vietnam, he and the men he came over with lined up and the first six of them, Keesler included, were sent over to the armored division.
“I was driving the armored personnel carriers,” Keesler said. “A troop had been in a big battle in the middle of November and they had lost a bunch of vehicles and lost a bunch of men, and I was just a replacement.” Keesler never saw service as an MP, but instead as a gunner manning an M60. His training for that role was on the job. 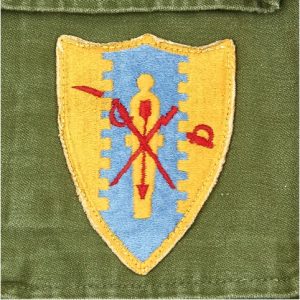 An image of the insignia seen on Avery’s shirt. 4th Cavalry Division of the Big Red One. 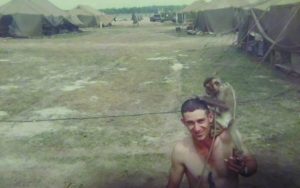 Avery, at base camp with Charlie, the 4th Cavalry’s adopted monkey.

“He would take off and you wouldn’t see any of him until after it was over.” He was a small monkey when he first came to the camp and grew up around the soldiers stationed at Phu Loi. “I don’t know whatever happened to him. When I left he was still there.”
The downtime excursions were few and far between as most of the time spent in camp was spent repairing and refitting the armored vehicles. They spent a lot of time on Highways 1 and 13 on their patrols and in and around the Iron Triangle between the Saigon River, the Tinh River and Highway 13.
Around the end of May 1966, Richard Keesler drew leave time in Bangkok, Thailand. He had no money of his own, everything he had he would send home to his family. He also had no real use for money in Vietnam so, when he drew the R&R, he had nothing to carry him over.
“Avery said, ‘Hey, how much do you need, do you want $300?’ I said, ‘Yeah, sure, that would be great.’ He told me I could just pay him when I got back,” just that easily Avery made sure his buddy could enjoy his break. “He was just the kind of guy that would do anything he could for you. There was no selfishness in him. He wouldn’t think about making a sacrifice, it just came natural. It was a matter of ‘this person needs this.’ He would give without thinking.”
When he got back from Bangkok on or about June 7, 1966, Keesler’s money had come in from home and he paid Avery back as the company was getting ready to go out on their next mission.