The Russell County Laker Band traveled to Pulaski County High School on Saturday, October 25 to present their show, “Praeteritum: What is Past is Prologue.”
The band competed in the small division competition, and swept the captions, winning Best Overall Effect, Best Music Performance, and Best Visual Performance. The group also won first place in the small division category.
The preshow opening shares emotional comments from past band members and current seniors, detailing the tremendous impact band has on students, and one thread remains true – it’s a legacy of love. 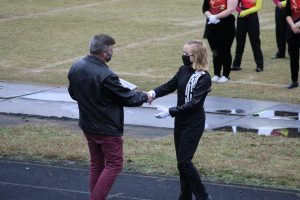 The current student members pay homage to those who have come before them, not only with the voice overs that weave throughout the show, but with a medley of music and signature moves from past shows, including “Forest Has a Song,” “Illusionary World,” “Nothing Gold Can Stay,” “From the Depths of Dark Waters,” and “We Are, Too.”
Although regionals and state competition were cancelled early on due to COVID-19 concerns, the band pushed forward and prepared a show, in hopes of an opportunity to compete or at least perform on a field in front of a crowd.
The weekend before, on Saturday, October 17, the Russell County Laker Band traveled to Glasgow for the Barren County Marching 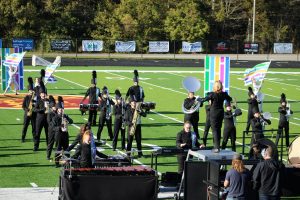 Invitational show. Russell County took the field in exhibition in the field show class at 4:00, and performed their 2020 show, Praeteritum: The Past is Prologue. 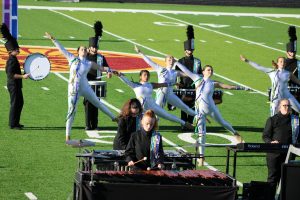 Praeteritum is the Latin word for “the past.” This year’s show is a homage, or tribute, to some of the band’s more recent past shows.
“​The statement ‘What Is Past Is Prologue’ is a way of saying ‘what has happened in the past is a preview of what is to come. It can also be taken to mean that everything up until now has merely set the stage for us as a band program to make our own destiny,” said band director Curtis Ervin.
He continued, “As this pandemic has dealt a severe blow to our students and this activity that we love, we have a choice to make: We can either let it keep us down, or we can decide to rise above it, knowing that we have already accomplished some great things in the past, and that we choose to push forward to future accomplishments.
“In another way, we are saying the story isn’t over, we are just getting started. Also, we are acknowledging that where we currently are as a band program is the result of the hard work of so many alumni who have pushed, led 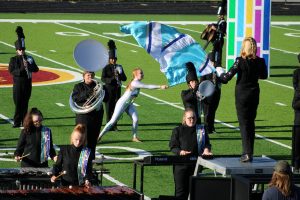 and showed us the way.”
With the pandemic of COVID-19 in the spring, many of the band’s traditions were modified, after approval from the school board and the local health department. The band practiced throughout the summer, preparing a show, 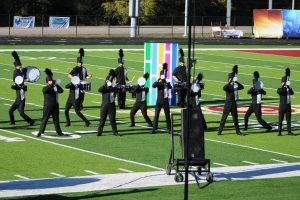 all the while unsure if they would even be able to perform it in the fall. KMEA cancelled regional and state competitions, and yet the band continued to practice, hopeful for performance opportunities.
Directing alongside Ervin is Haley Harrington. The two of them are currently overseeing the 51 members of the marching band, which includes 6 color guard members, four frontline ensemble members, four drumline members, and 36 members playing woodwind or brass instruments.
The band is led by drum major, Sarah Pendleton, who has reprised her role as field commander for the second year.
The group has been blessed to perform two weekends in a row, and will conclude their competitive season this Saturday, October 31 at South Laurel.