The 2020 KHSAA 16th District soccer championship was supposed to have been decided last Tuesday at Clinton County Middle School and would have if not for a faulty breaker. 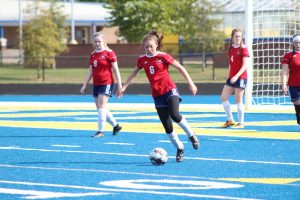 With Monroe County clinging to a 1-0 lead and just under 19 minutes left in the game the lights on the fan side of the field gave out.
Without much in the way of even ambient light (even the stars were shrouded by clouds) the teams waited. 15 minutes, longer than a halftime break, passed. Crews tried working the problem, but without the parts the problem could not be mended. 30 minutes passed and there was talk of hope that the breaker would be able to cool off.
At 45 minutes, which is longer than a half, the coaches and athletic directors agreed to give the lights another 15 minutes before packing it in. At 47 minutes the lights came back on, the girls on both sides cheered, but before they had grouped themselves to start warming back up for the third time that night, the lights died again.
Finally, after an hour and another failed attempt to get the lights back on, the officials and coaches agreed, tomorrow night in Monroe County. Monroe was designated the home team; it was the only correct thing left to do.
Wednesday night, both Lakers teams traveled to Gamaliel Elementary school, home of Monroe County soccer to finish the game.
The girls were still down 1-0 following Hannah Proffitt’s Tuesday night goal that was scored 10 minutes into the first half off a handball, and while they were able to press the attack for most of the remaining 18 minutes, they could not muster a clean shot to the goal. 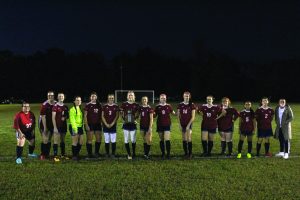 “I didn’t think they were going to come for another goal, so they were going to defend the whole time, so my plan was to attack, attack, attack,” girls coach Kirsty Chapman said. “What it came down to was that though we did decent, we just didn’t have the time to keep going.”
The closest look they got came with 12:55 left in the game when Samantha Betts-Jimenez saw her penalty kick sail just high. Following that miss, the Lady Lakers struggled to, but could not ultimately mount an effective attack.
Their district runner-up finish set them against the 2019 defending state champion Lady Gators of Greenwood at Warren East High School. The difference between the two programs, one just come back and the other, a soccer power for the past generation, was impossible to miss, but the loss didn’t cause the team to lose sight of their goals for the future.
“Overall this has been an impressive season for the girls,” Coach Chapman said. “We still have a lot of work to do before next season. We’ve got a better idea now of what we need to work on. Our goal next year is to come up number one for district.” 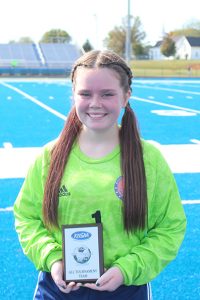 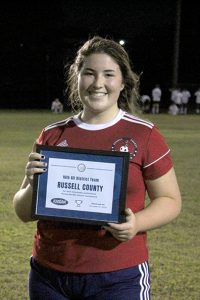 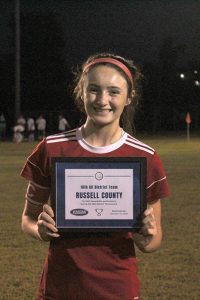 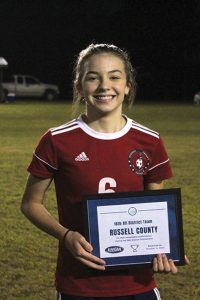 Boys
Following the end of the girls’ game against the Lady Falcons, the boys’ team finally got to play Monroe. They had likewise been out waiting Tuesday night for the Clinton County lights.
While the Lakers had defeated the Falcons twice this season, they found that beating them a third time was a whole other matter. 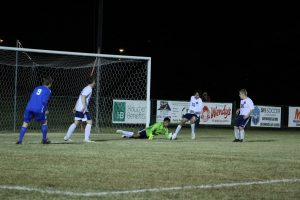 “These guys are still an inexperienced team. This is our fourteenth game together and some of them this is their first year playing soccer,” boys coach Steve Betts said.
The game started well with Russell on the attack early making Monroe’s Jarius Glover work with five early saves, but even where the boys were able to develop strikes against the Falcons, their shots were often harried by the defense.
Wilmer Perez-Cardona likewise held the opposing offense at bay when they broke through. While the two teams traded attacks, neither could sustain offense as much of the game was played in the middle half of the field.
Yahir Casimiro-Lopez and Jay Bailey continually frustrated the Falcon’s attack while on the wings Keegan Wade and Elijah Collins tried to break out for Abismael Gomez.
The teams played dead even across the night, and when Monroe County scored with just over 10 minutes left in the game, the goal did not have the sense of finality that other late goals might, and as Monroe celebrated coming back to midfield it was little more than relief.
“The boys worked so hard and then you just get one of those where it gets by you and you can’t recover,” Coach Betts said. “They did the right thing.”
Russell County was able to get on the attack for the next five minutes, but again Monroe’s defense was able to keep that attack to the penalty box and the Falcons held on to win 1-0.
“They were really able to drop back their mid field and play defense as well, so we get down there and they’ve got 6 or 8 guys back,” Coach Betts said. “There was just no way to get a clear shot in front of the goal. We got a couple of crosses, but we just weren’t up fast and far enough. That’s the way it goes sometimes.” 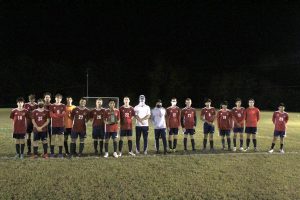 The Lakers drew Glasgow in the 4th region tournament, and while their loss against the Scotties might not look very different from their loss the week before, the Lakers played much better the second time around, playing tighter on defense and working quicker to get the ball out of their zone.
“We’re just going to come back stronger next year I know that. We’ll start conditioning a little earlier next year. It all depends on how the whole COVID thing goes. I hope it’s gone by then,” Coach Betts said. “We ended up with 13 games in the regular season. Next year I’m trying to have about 18 so if one gets cancelled here or there, we’ll still have about 16 games overall and I think that’s enough.”
Where the team will need to continue to develop is offensively where they simply do not have the comfort playing with each other that more seasoned teams do.
The team is returning all their players but Wilmer Perez-Cardona. “I hate to lose a keeper. We started training a new keeper up and we’ll work with him a lot in the off season and he’ll be ready to go next year,” Coach Betts said. “I’m looking at having an even better year. I couldn’t be prouder of these guys and the work they’ve put in.” 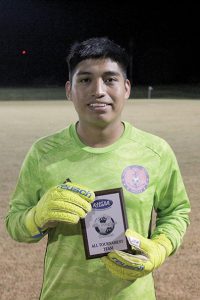 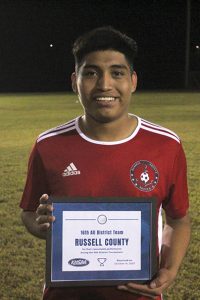 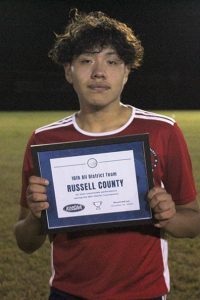 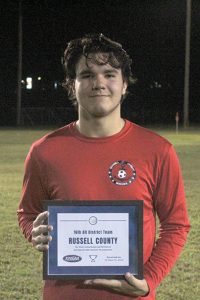