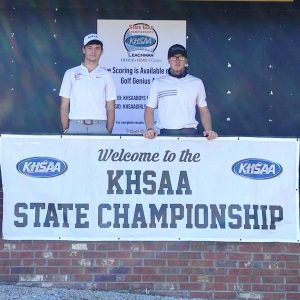 This past week three Russell County golfers made the trip to the Bowling Green Country Club for the 2020 Leachman Buick-GMC-Cadillac/KHSAA State Golf Championships. For seniors Nick Blakey and Clay Anderson, it was their final event of their high school careers. For junior McKenzie Trautman it was another step in her path and a promise for next year.

While each of the players came away wanting to have done better, each of them in disappointment still had remarkable seasons in reaching the pinnacle of high school competition.

While the course was difficult enough with the early week fair weather, the weekend girls’ action included sporadic rain throughout the day causing the golfers to constantly have to get into and out of their wet wear. “As soon as you’d accept that you needed your umbrella it was time to close it again,” girls coach Melinda Wright said.

The boys championship took place over Tuesday and Wednesday of last week with Trinity ending Taylor County’s state championship streak at two (though the Cardinals did finish only four strokes back as runners-up) and Jay Nimmo of Marshall County taking the individual title after winning a one-hole playoff against Cooper’s Ryan Wotherspoon. Both boys finished shooting 141 (-3).

“You have to really be on your game to put up a good score there,” Coach Anderson said. “If you miss the fairways you face a very difficult challenge just to make par. It’s a true test of your golfing skills.” 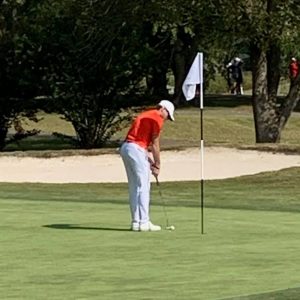 “This was his third year of qualifying for the state tournament, being his senior year this one hurt the most,” Coach Anderson said. “He had goals and dreams of making a deep run for the state title and this one hurt. He didn’t have his best ball striking day. But he never quit, never gave up, and just kept battling. His experience paid off even through the backside of the course.”

The 84 was Clay’s highest score in 18 holes this season.

“I’m super proud of Clay,” Anderson said. “I told him there’s that he’s had a stellar high school career. He’s accomplished so much throughout his time and one bad day on the golf course doesn’t diminish that at all.”

In total, only 152 boys high school golfers qualified for the state tournament this year, 48 on teams and 84 as individuals.

In his first trip to the state championship Nick Blakey did make the cutoff for individuals to compete in day 2. The senior birdied on holes 4, 5, and 14 and hit par on six other holes to score an 81. 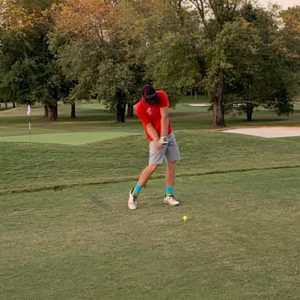 “Last year, Nick came down with us to watch Clay play and he said he would be here next year,” Coach Anderson said. “He said, ‘I’m going to qualify for here next year, I’m going to make it.’ The work he’s put in from last year’s state tournament to this year’s is just unbelievable.”

Nick’s 81 was right at the cutoff to keep competing, but unfortunately, he could not maintain his day one pace. He struggled off the tees and finished the round with a 91.

“The rough at Bowling Green Country Club is Bermuda grass,” Anderson said. “It’s rough, it’s deep and if you’re not getting the ball onto the fairway it’s really difficult to advance it onto the green.”

By the time he had battled through roughs to get back onto the greens, their speed became another obstacle.

“The greens there are lightning-fast,” Coach Anderson said. “We played on some fast green this year to help prepare for this, but it was we’ve never faced anything as fast as these greens.”

Like the others, Nick was disappointed in his performance, and as with the others, his coach was there to teach even after the last putt. “I reminded him of last year, when he was talking about his goals of getting here, and how he accomplished that. Just as with Clay, one bad day does not diminish what Nick was able to accomplish in his career, and especially this year. I was so proud of him.”

Coach Anderson was not only proud of his boys for making it as far as they did, ending their high school careers at state, but also the way they carried themselves despite their troubles at Bowling Green.

“They represented Russell County high school and I like the golf team. Both of them are outstanding young people and I look forward to what both of them are going to be doing in the future. I’m just very proud to have been their coach.”

The third Laker to make it to state is also the one who will have another go at it next year.

Like the boys, McKenzie qualified as an individual. Like the boys, she left Bowling Green looking to improve her game. “She felt like she could have played a little better,” coach Melinda Wright said. “She was disappointed in some things, but I told her this is a big deal just to get to state, at to the think of how many girls that are here but did not get to play in the second day.”

As with the boys, the combination of difficult paths, roughs, and fast greens proved a challenge for Trautman.
“She got off the tee well most of the time and her putting was challenging. The greens are fast. She did have a few three-putt holes, and hole 18 threw her for a bit of a loop.” Each of the Laker golfers had problems on 18, as did most of the field.

“I believe it because it’s a there are trees left and right and if you don’t really hit the ball straight, you’ll get stuck on there. It is very challenging.” 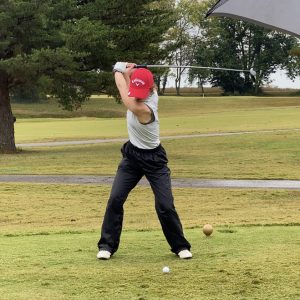 McKenzie parred on eight holes on her day one outing. Day two brought with it the rain, but McKenzie made those conditions work for her, again making par on eight holes, but also limiting herself to only one double bogey.

On the second day, Coach Wright used their previous experience to help McKenzie scout better spots to hit to on the course. Also working to McKenzie’s benefit were the slower greens afforded by the wet conditions, and the fact that unlike other golfers, she likes playing in the rain.

“When it’s raining, she will purposefully go outside to her back yard and practice in the rain, and there’s not many players who do that. Usually when it starts raining, the scores start going up.”
McKenzie rotated through three gloves to keep her hand dry and keep her grip throughout day 2 and finished with an 83 (+11) through that round.

With the KHSAA golf season over, McKenzie will join the other girls in their offseason. Though for year-round sports like golf, offseason, may not be the best word for the time. “She and Breanna are going to be working throughout the winter, playing in tournaments as they come up and getting ready to go again next year.”

The individual girls championship was won by Macey Brown of Apollo High School who won a one-hole playoff against Elizabeth Eberle of Madison Central after both finished with a +1 145. Marshall County claimed their first-ever team title by 39 strokes over runner-up South Warren.
Both Laker golf teams will return next summer.