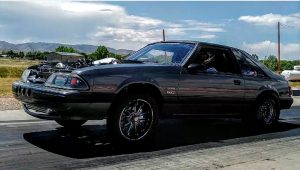 “It’s just a type of adrenaline that you can’t explain,” Landon Helm said. “There’s all sorts of things out there that give people a natural high, speed is one of mine. From the G-force pressing down on you to actually driving the car, it’s just something I can’t explain.”

From the age of 16 Landon Helm has had a love for speed and that love has carried him into the world of competitive street racing. This November Helm gets to share that love with the world when he and the crew behind eBay Bandit will appear on the Discovery Channel show “Street Outlaws.”

Helm is the driver of eBay Bandit, his Ford Mustang and he credits Michael Carnes and local drag racing legend Gary Turner as some of his biggest influencers growing up into this world.

Landon said he became friends with Turner’s sons when he was younger and got to learn a lot about racing up close and has had a love for it ever since. “All these guys who help me on the car are local. Michael Carnes, Victor Contreras from Haltech in Lexington and his son and Thomas Jones from Chicken Hawk Motorsports in Somerset they’re part of my team and when you do this you have to have a special person for everything. We’ve got a transmission builder, a motor builder and a guy that does turbo kits and suspension which you’ll hear more about on the show.”

Helm said that he wouldn’t have made it this far without his team who each play a vital role in helping him do what he loves.

“There’s a thing called torque management and what that boils down to is when I make my first pass these guys can look at the data log from the driveshaft sensor and tell whether they need to add more power or take some away to fine tune the car to the particular street that I’m racing on. That’s where the guys from Haltech come into play.” 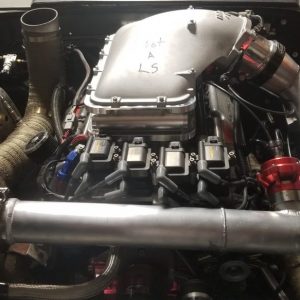 Landon said the biggest difference between track racing and street raising is that on a track the surface you’re racing on is smooth and has been prepped with a substance to make the cars hook to the track. With street racing there is no compound, the stretch you are racing on is not smooth and it’s up to the driver and the car.

“So a car that has 1000 horsepower can beat a car with 5000 horsepower if they’ve got their computers adjusted correctly.” Helm also said he is working on another mustang that he hopes will be racing with up to 5000 horsepower.

The new season of “Street Outlaws” starts on October 19th, Helm expects to be on the third or fourth episode of the seasonFor more information check out the eBay Bandit page on Facebook, Landon Helm’s personal Facebook page and be looking for information on a YouTube channel coming soon.