What does it mean to be homeless? Today there are different forms of being homeless without simply saying someone does not have a roof over their head. You could be a teen right out of school who is couch surfing and staying with friends at night, a person who has a job but lives out of their car taking showers at the local gym where you are a member, or you can be what comes to mind for most of us a person who is sleeping on a park bench with no shelter and no refuge from the elements.

One group in our community has made it their mission to seek out people in each of these categories and to help.

Hope for the Homeless is a group formed only a short time ago to assist people who are in an impoverished state throughout the county connect with the resources that can help them get back on their feet.

Speaking with one of the original founders of the group, Teresa Murray she brought to light a crucial problem stating, “so many of the people who are considered homeless in Russell county struggle to get any assistance because they don’t have permanent addresses which is most usually one of the requirements for any form of governmental help.”

With this in mind Teresa and others set out on a mission to improve awareness among the citizens in Russell County.

On Friday, October 9th Hope for the Homeless carried out their second annual “Sleep Out.” The Sleep Out is designed to connect people with the reality of what just one night of being without a roof, food, or the comforts so many of us have become accustom to would be like.

In 2019 the first Sleep out was held in the Russell County Park with a large group of supporters gathering with speakers giving stories and testimonials of how they were once or are still homeless and the struggles they had to overcome.

Teresa recounts “it is eye opening to hear the stories of these people who once may have slept on the ground and are now in homes, have children, and are working steady jobs because someone was made aware of their situation and connected them with people who could help.”

This year like all other social gatherings the even had to be orchestrated differently in order to comply with the COVID-19 social parameters set by the state but Hope for the Homeless was determined to still hold the Sleep Out and they found a way to make it happen.

Last week the Supporters set up multiple small sites with their families remaining distant from the others involved. The group set up social media groups to allow the speakers to reach each of the groups virtually and they were still able to carry out their mission of growing the awareness in the community.

While one night of sleeping outside in no way can measure up to the plight of not knowing where your next meal will come from or what you will do for shelter as the temperatures outside drops Teresa and her team want the message that “everyone can help” to resonate with each of these events. Hope for the Homeless attempts to connect anyone who is struggling with the assistance programs that are available in our area because as she put it “they are difficult for people who don’t have access to internet and phones to find and often a well-kept secret in the community.”

Throughout the nights of the group sleeping outside each of them found certain small things that would not have been thought of or realized had they not gone through this small exercise. 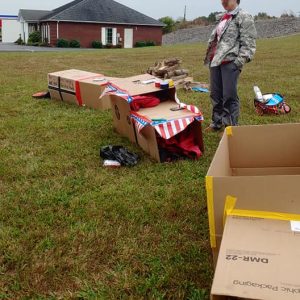 Teresa shared with me her own realization being a person who has some medical dietary restrictions, “while local churches and people brought food for them to show their support I couldn’t eat any of it due to my condition and was forced to make it through the night on a small bag of nuts that I had.” This brings to light a hard decision that she was sure others who were actually in a homeless situation faced on a daily basis, “do they go hungry, or eat something that may cause them problems due to medical conditions.”

Hope for the Homeless is working diligently to grow the group and the awareness of homelessness that is in our community even though we may not see it. With the help from the Mayor Eddie Thomas and other City officials the group will continue their mission of showing everyone that there is Hope.

Teresa urges everyone to get involved and do what you can to just help one person, “what a difference it would make if everyone in the county just helped one person who was struggling,” she stated.