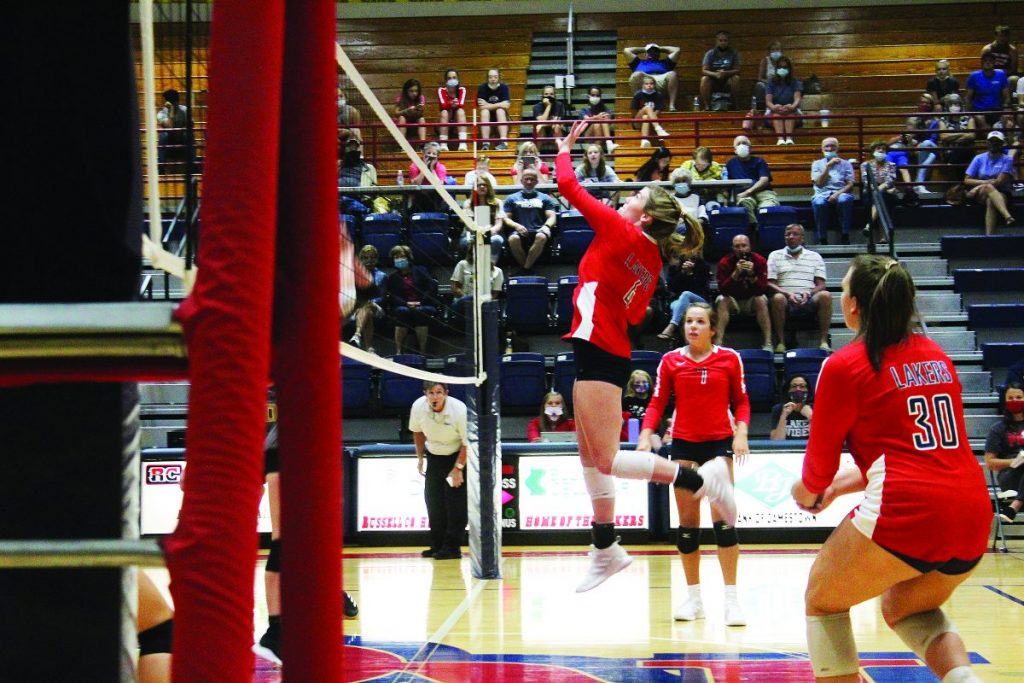 Olivia Hinkle attacks the net as the Lady Lakers fight to get back into the game. Photo by Drew Bergman.

After weeks of buildup and months of waiting, high school volleyball returned to Russell County Monday night. With temperature checks at the doors and social distancing mandates in place throughout the gymnasium, the scene was an uncanny representation of what is to be expected out of a high school match.

The oddity of the evening extended to the play on the court as the Lady Lakers fell behind early in both sets before falling to Campbellsville 18-25, 20-25. “There was no part of me that ever expected this kind of outcome for the game,” head coach Faith Womack said after the game. “I’m not the type of Coach to make excuses. I do think nerves played a little part of that in the beginning [and] that’s normal for the first game.”

The Lady Eagles opened the first set on a on a 16-2 run as Russell County struggled for consistent play across the board. Neither team was sharp, but Campbellsville avoided the missteps which put the Lady Lakers behind.

“There’s a difference between being prepared and being ready,” Coach Womack said. Being prepared requires teams to have put in the work, the time training and practicing. Being ready is about “being in the right headspace and letting all the distractions go to the wayside, being truly zoned in on volleyball. I feel like that was a huge part of our loss tonight was, as I told the girls, we were more prepared, but Campbellsville was more ready than us. And ultimately that’s what caused the outcome.”

After the opening of the first set down 14, the Lady Lakers were able to claw back to within six points. On the heels of that 16-9 run which ended the first set it seemed that Russell County had knocked out the cobwebs or off the rust.

The Lady Lakers had no time to wallow in the opening night disappointment as Tuesday night they began district play against Cumberland County (results were not available at press time).

Following the match against Cumberland the Lady Lakers will travel to Metcalfe County on Thursday and return home to host Glasgow on Saturday.

“They have an opportunity to win three more games this week, and just put that behind them and use that for fuel and really show what they’ve been working on this summer,” Coach Womack said. “We’ll get there.”