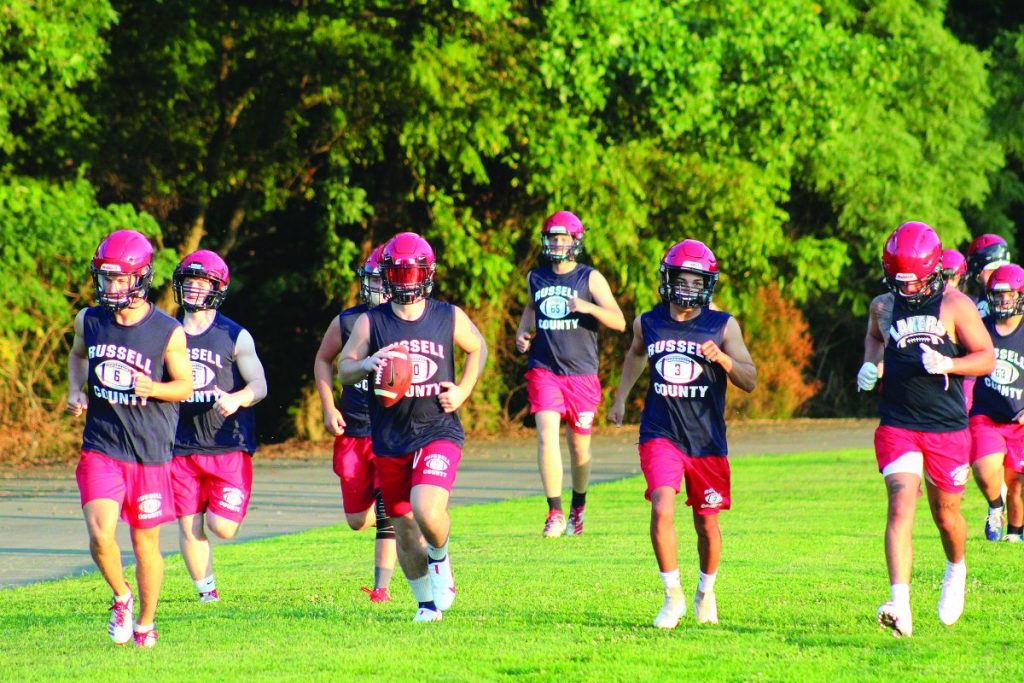 When the Mighty Lakers take the practice field this evening it will be their final full practice before they open the 2020 campaign. For the past two weeks the team has been installing their offense, defense, and special teams packages. Fortunately for them, they’ve been there before.

‘We’re just lucky we’re in our second year of our system,” head coach Ryan Richardson said. “I would hate to be a new coach putting in two new systems right now, especially with the limited amount of time.”

With 14 total practices, including tomorrow night’s walk-through, the team has been working hard to make the most of their limited time, particularly on the offensive line where they have a bevy of new starters to take up the task from a unit which helped Dylan Bland and Collin Darnell combine for over 3,300 yards on the ground last year.

“We’re in hurry up mode anyway,” Coach Richardson said, “so we feel pretty good about what we’re at right now,” said Coach Richardson. “Are we going to be perfect the first night? No, but we’re getting there to where we think we got something build on.”

On defense, Russell County is settling in well and the players are responding to what the coaches are throwing at them, which will take on an added importance this season as teams will struggle early on with executing having their preseason practice time cut to two weeks from the normal seven.

“Defensively, we’re always preaching to our players to try to avoid giving up the big play, having the ‘bend but don’t break’ mentality. But there’re going to be mistakes. It just is what it is. That’s going to be people can look for the first week, there are going to be a lot of penalties and a lack of execution because we all have had a lack of having some mental reps that we usually would.”

Coach Richardson expects teams across the state to struggle early in the season. “I don’t think there’s anybody the state they’ll be ready for their first opponent. Like they usually are just because of the timetable and what we’ve had to do,” he said. Fortunately for everybody they’re all stuck in the same situation.

Whatever the quality of play week one, the team is excited for the opportunity to get their reps in and to continue to improve, especially after such an uncertain summer. “We’re tickled be playing. There’s been ups and downs and change from hour to hour. We didn’t know if we’d be to this point and we just look forward to kicking off Friday night. Especially knowing that there was a great chance that we wouldn’t get to do this.”

With all the distractions and all the potential pitfalls even before the start of the season, Coach Richardson still expects his team to compete for and win the district title this year. Russell County competes in 4A’s District 2 against Allen County-Scottsville, Franklin-Simpson, Warren Central and Warren East.

“We feel like we have everything in place that we can make a run at the district this year. It won’t be easy, our district pretty good. But we feel like we’ve got enough talent that that is our overall goal.”

But first is Casey County. The Rebels defeated Russell County 34-19 last season, but last season is no guide for this one.

The Lakers have hope for a full season and have worked for their full season and will continue to work for the full season, but it all comes one day at a time, and as for today: “We’re preparing for Friday night against Casey.”