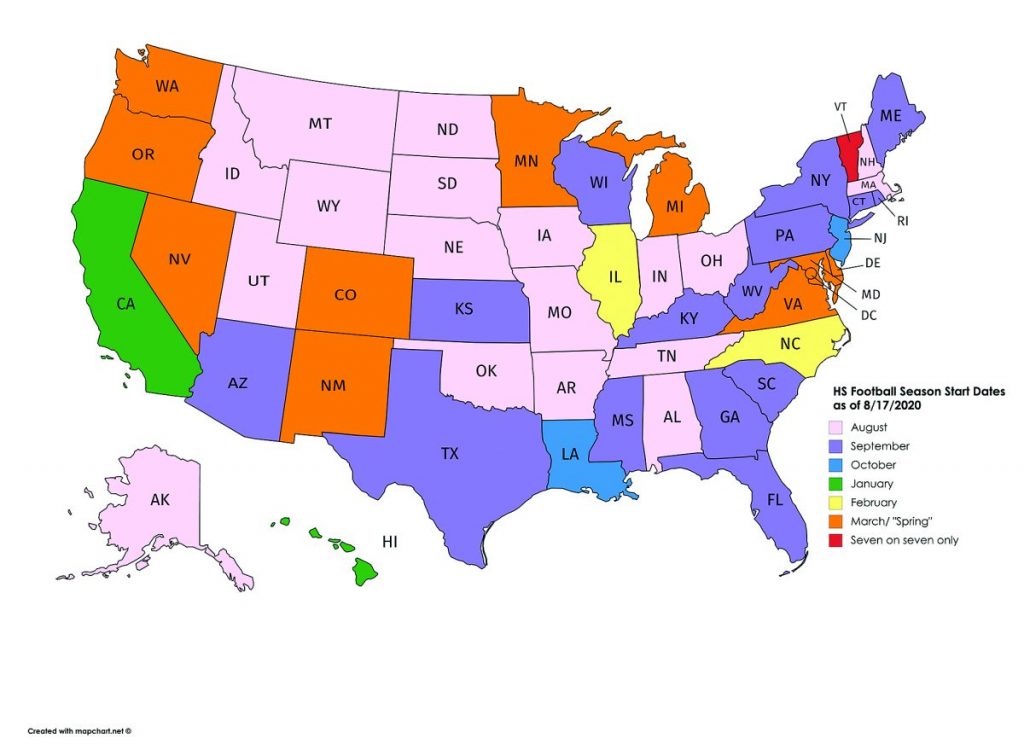 The various announced start dates for high school football across the nation. 14 states have chosen to delay their seasons until 2021 and Vermont has chosen to limit play to seven-on-seven contests. Map by Drew Bergman.

With 14 states having already decided to push the start of football back to the spring of 2021, the eyes of the commonwealth turn once again to the KHSAA Board of Control as they gather again to reassess the fall sports season four days before the announced start of practice.

Reassess is the key word here as the last time the Board of Control met, they decided on a plan to allow the other fall sports to join golf in holding regular practices and games. As of writing, that plan is for the remaining fall sports: cheerleading and dance, cross country, field hockey, football, soccer, and volleyball to begin practices on Monday, August 24.

From there an abbreviated regular season would begin on the week of September 7. Already Fort Knox and Fort Campbell high schools, which are subject to Department of Defense policy, have cancelled their football, soccer, and volleyball seasons

On Tuesday morning Kentucky High School Sports Twitter woke to a graph put out by the Kentucky Football Coaches Association presenting data gleaned from 190 of the states’ 223 football programs. The data reinforces what anecdotal evidence has indicated since the beginning of July: that aside from the outbreak in Hazard, Kentucky high school coaches have done well in keeping their players and staff safe in their isolated environments, away from the general student population.

The numbers themselves, while encouraging, have problems. While the coaches’ report does list the total number of players involved in the 190 reporting teams as well as the total number of reported cases, it does not offer information on the total number of COVID-19 tests. Also, given the absence of statewide testing specific to high school athletes, as well as COVID-19’s propensity for infecting asymptomatic carriers, the raw number of cases and the percent of participants testing positive are both likely underreported.

More to the point, the state’s athletes have been meeting in clusters of ten, most of the time outside in the open air. They have not yet been in hallways or classrooms or school busses travelling to away games or poorly ventilated locker rooms that still hold the aroma of the first teams to dress there.

Most of Kentucky’s high school sports teams are going to be able to remain relatively isolated until the end of next month. Governor Beshear announced on August 10 his recommendation that schools delay in-person instruction until September 28 (Russell County schools elected to go online until after Fall Break the week before). While most of Kentucky’s school systems are complying with the governor’s request, locally, Green, Metcalfe, and Warren Counties have decided to go forward with their in-person opening plans.

The differing needs of different counties gave rise to the August 20 meeting as representatives from Jefferson County Public Schools, the state’s largest school district, had reservations about going forward with the season in late August. On Monday JCPS superintendent Marty Pollio told the Courier-Journal that the JCPS school board would be meeting Tuesday evening to discuss fall sports in Louisville.

Pollio also said that no decision or vote would be made ahead of the Thursday meeting of the Board of Control, but that if the KHSAA decides to keep to its current plan, then JCPS would make their own decision. In such a case, the rest of Kentucky might play while JCPS schools–including Louisville Male High School, the second-winningest football program in the nation–would be staying at home.

That split between a city and its state already has a precedence as Kansas City, Kansas public schools will not be participating in fall sports though the rest of the state will be playing this fall.

The Board of Control meeting will be Thursday morning at 9:00 a.m. Central and will be streaming live on the KHSAA YouTube page.