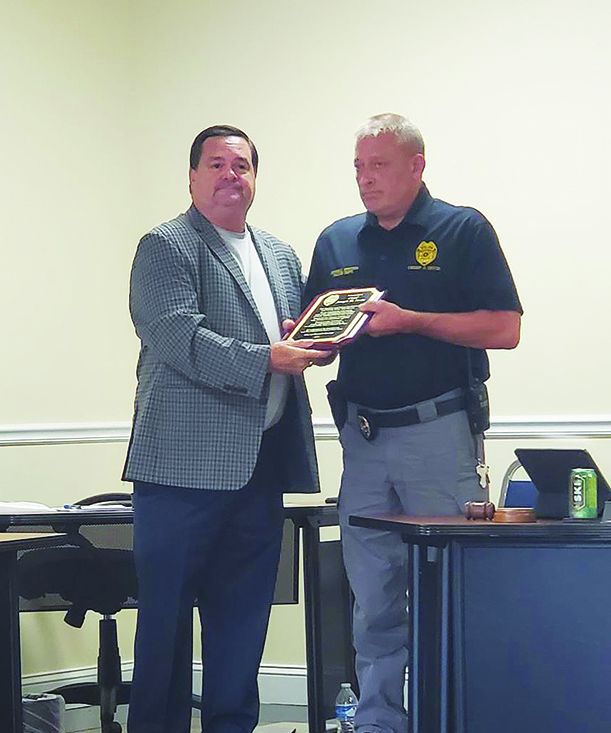 Russell Springs Mayor Eddie Thomas presented a plaque to Police Chief Joe Michael Irvin for his 24 years of service to the city of Russell Springs.

At this month’s regularly scheduled city council meeting, Mayor Eddie Thomas announced that Police Chief Joe Michael Irvin will be retiring at the end of July.

Irvin has served the city of Russell Springs for 24 years and has been chief for the last 20.

Mayor Thomas presented Chief Irvin with a plaque saluting him for his years of service. He went on to compliment him for his work ethic, fearless attitude and how he has inspired those around him.

Councilwoman Sherry Daniel addressed Irvin at the meeting, saying “You’ve always treated people fairly and you’re going to be a tough act to follow.” Russell Springs Police Department Officer Melissa Taylor will be acting as interim chief while the city conducts their search for a new chief. Applications will be available for local and out of department officers. There was no mention if Officer Taylor will be seeking the position.

In other council news, the council spoke of how happy they are to see the city park open and operational after closing for a few months due to the regulations implemented amidst Covid-19. Mayor Thomas said “The city park is now fully open and I’m just tickled with the way it looks over there.”

Also at the meeting: The city’s budget was passed and the council discussed adding a new crosswalk near the Municipal building. A proposal has been submitted to the State’s road department and is awaiting approval.

The mayor and other council members expressed their gratitude to the city’s police department saying their presence has been felt and much appreciated. The community has also shown their support to the department by bringing food for the officers and other acts of kindness.

In closing, Mayor Thomas mentioned that the council has been invited to a flag raising ceremony at the jail on July 24th at 2 p.m. and a ribbon cutting ceremony for the TJ Sampson health clinic August 7th at noon. Mayor Thomas and other councilmembers are planning to attend these events.