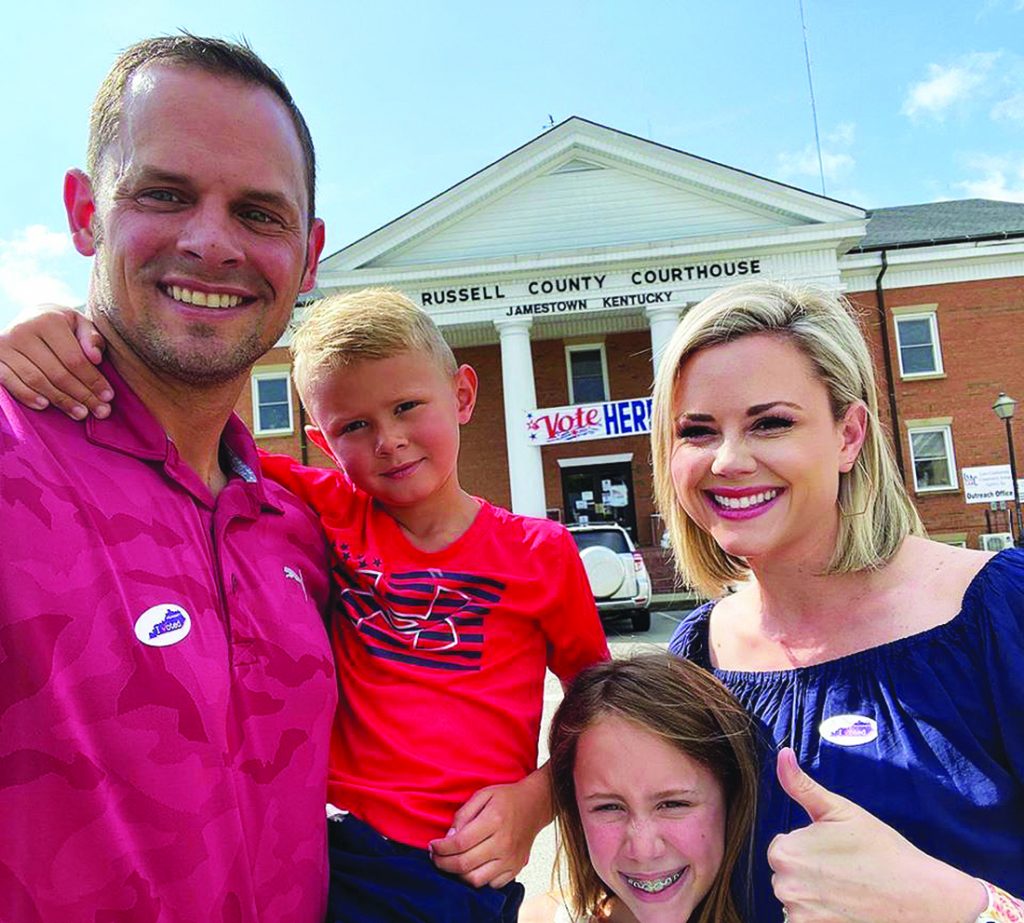 Josh Branscum and with his wife Kara were among those who utilized the early voting option for this year’s Primary Election. They are pictured here with their children, Knox Archer and Porter Grace. Photo courtesy Josh Branscum for State Representative Facebook Page.

Josh Branscum has been helping build Russell County since he was a boy and following this year’s primary elections, he will be tasked with helping Kentucky rebuild in the wake of the novel coronavirus. The discipline of work, particularly the work of construction, should serve Mr. Branscum well when he takes office this January, especially with all the hard choices ahead for the legislature.

“Our family business is construction, and I’ve done it my whole life,” Mr. Branscum said. “Going through high school I would work out in the field as a laborer, and even during college at summer breaks and winter breaks, I’d go out and work in the field.” Being out on-site taught Josh not just the value of hard work, but the commitment to stick to a task no matter how daunting the work.

“It teaches you to get up, even on mornings when you don’t feel like it, you’ve got to get up. You’ve got to get up hot days and cold days. There’s still work that’s got to get done,” Mr. Branscum said. And when the job is completed comes the joy, not simply for the completion of the project, but to see the new building take its life.

Along with the schools and libraries, Branscum has also had a part in shaping and building the future of Russell County businesses. “With my job now, I get to work with a lot of entrepreneurs, people who are just starting their businesses and I get to work with them on the front end and I get to see that entrepreneurial spirit. This business is their dream and we’re literally helping them to build their dream.”

But building the dreams requires workers, and in an environment like a construction site, workers are susceptible to injury which is why Branscum has made worker health and safety a priority in his business as well as in his campaign. “In our business and all businesses, the one thing you want and that you strive for is worker safety. We always say we want everybody going home every day. After work, we all have families to go home to and that’s the most important thing is [getting them home safely],” Mr. Branscum said.

“One of the things our company has done is to partner with the Association of General Contractors (AGC) that have really strong programs like the PROTECT (Program Recognition Through Extensive Construction Training) Program which helps companies cultivate a culture of safety.” Branscum believes that through professional partnerships and programs like these the government can continue to foster safe working environments utilizing private-sector solutions.

Even the safest site wears on the body, the nature of construction work is demanding and grueling, and that is why Mr. Branscum served as the chairman of the AGC of Kentucky’s Opioid Initiative. The nation’s opioid crisis effects every community but hits especially hard in construction which is why Mr. Branscum worked through the initiative to help educate workers on pain management options as well as rehabilitation and recovery options. “It’s something that affects our industry every single day and it’s not limited to our industry,” Mr. Branscum said.

That impulse to take on the responsibility in the community is something that was fostered in Mr. Branscum from a very young age. “Public service is something we’ve always been taught growing up.” He grew up with the message loud and clear: “You need to serve; you need to give back and try to improve your communities.”

But before this past fall, elected office was not the place Mr. Branscum saw himself. After he finished college, he served on the GOP State Central Committee before taking a position on the State Board of Elections, where he eventually became Chairman. “A year ago, if you told me I’d be running for office, I’d have said you were crazy. I’ve always tried to be involved in public service but maybe in other ways.”

The decision to run didn’t even come until last fall after State Representative Jeff Hoover’s announcement that he would not seek another term. When it did come it was after weeks of discussions. “I told them I just want facts. I don’t want to be swayed one way or another. I just want facts. If I can get the facts together then I can make an educated decision on what I’m going to do going forward.”

He credits the support of his wife, Kara, a teacher at Russell County Middle School with being instrumental in his decision to seek elected office. “If my wife wasn’t 100 percent onboard there was no way I would have done it. Campaigns are tough enough on the candidate, but they’re equally if not more difficult for the family. You have to have a spouse who is 100 percent on board with you because there’s going to be good days and bad days and you have to be there for them and they have to be there for you.”

Branscum’s campaign was hardly three months old when it faced its first challenge – the arrival of the novel coronavirus and the resulting shutdown of so much of our in-person existence. On Friday, March 13, the same day that Governor Beshear sent Kentucky’s schoolchildren home for what would be the remainder of the schoolyear, Josh had to make a decision about the future of his campaign.

He had a community Meet and Greet scheduled the following Monday at the Russell County ANC, what would have been his largest campaign event of the primary season, both in terms of attendance and in terms of critical fundraising.

“At the time people were still trying to figure it out and every day there was a new development and a new guideline. We were trying to figure that out. Some were saying go ahead and have it. Others were saying be cautious,” Mr. Branscum said. “I have family members with weakened immune systems and a lot of people who would have been coming would have been in the same situation. If they didn’t have a weakened immune system, maybe they had a family member who did. For me, it was just the responsible thing to do.”

He was not and is not sure how the decision affected the campaign, “But at the end of the day, if it was something that ends up hurting my campaign, I was okay with that because it was the responsible decision to make.”

Now Mr. Branscum has six months to ready himself to make more hard, responsible decisions. The Commonwealth of Kentucky is currently facing a $1.1 billion budget shortfall driven by lost revenue from the novel coronavirus. At present, the state is one of a only a handful that is effectively managing the crisis, and with or without help from Washington the task ahead of next year’s legislature will be monumental.

But Mr. Branscum first came out of college and into business in the middle of a crisis, namely the 2008 recession, so he has some experience being inexperienced and having to work his way through a dilemma. “One thing I hear people say is that we just need to cut state government. You have to be careful with that because when you start cutting state government you could be cutting jobs, so you have to be very conscious of that. It’s going to be the biggest challenge. But next year we’re going to pass a budget and the year after we’re going to pass a budget and I’m up for the challenge.”

One challenge he will not have to face is a general election vote. Kentucky State House District 83 is nearly 80 percent Republican and the Democratic Party has not put forth a candidate to challenge in Mr. Branscum in November. Having worked on and chaired the Board of Elections, Mr. Branscum has a special appreciation for the work that was done ahead of the June primary and the challenges that lay ahead for everyone hard at work at repeating June’s success. “For them to pull off this election the way they did speaks volumes about our clerks and the staff they have with them. To have run this election the way they did with very little issue, they need to be commended with what they’ve done.”