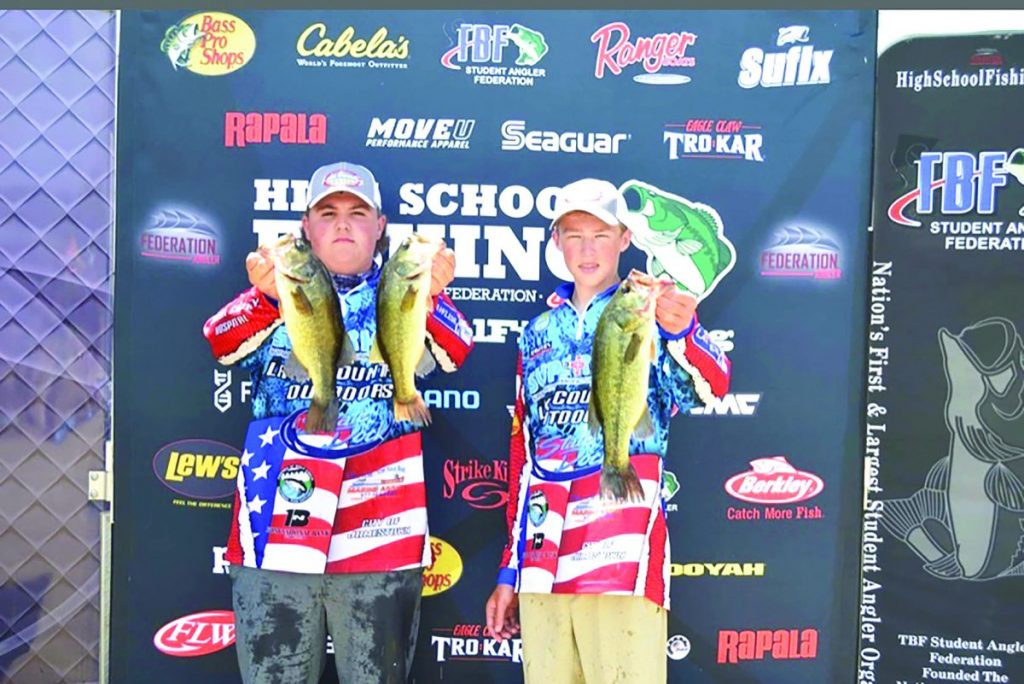 This past week Russell County High School freshmen Lucas Wray and Will Stephens traveled to La Crosse, Wisconsin for the Student Angler Federation’s High School Fishing World Finals. La Crosse rests about 150 miles southeast from the Twin Cities along the Mississippi River, where Wray and Stephens competed against 311 other teams from 39 states for more than $3.2 million in scholarships and other prizes.

After the first day the boys were two pounds outside of the top-20, with a day-one haul of 6 pounds, 8 ounces. “It’s very tight right now and nobody’s out of it yet,” said Russell County fishing coach Shannon Stephens that afternoon. “From 60th place to 10th place, there isn’t two pounds differences and in some places it’s just ounces [dividing] over 20 places.”

However, a rough second day where the boys only caught a 1-pound, 12-ounce fish knocked them out of top-tier contention.

“The kids fished hard, they caught and weighed fish each day,” Coach Stephens said. “It was a great experience for them. I’m thankful that nobody got hurt and everybody got back. It was pretty scary fishing.”

The two rivers that featured in the competition, the Mississippi and the Black River are a lot different from the waters in Kentucky. Up in western Wisconsin the water is much shallower, “You may see 700 yards and it’s only a foot and a half or two feet deep. You may use a trolling motor to get there to it and you may get out there you may not. Many of the channels are 15-20 feet deep and a lot darker than what you’re used to.” It’s not only a matter of the depth, but also the local plant life and very nature of the area which makes it so different. “There’s so much grass out there, it’s nothing like we’d ever fished in Kentucky. They had three different types of grass.”

While out for a Sunday practice ahead of the competition the team met a local, a veteran of fishing in the area. “He told me if we wanted to fish out there, we’d have to raise wide open and raise your motor up out of the motor. I asked him how deep it was up there, and he said, ‘Between two and three foot deep.’ I didn’t have enough nerve to run five miles in three feet of water.”

Where the Russell County team put in was about 400 yards from the Mississippi itself, and that far north the nation’s greatest river is not quite the behemoth we know in the western portions of the Commonwealth.

The low-water levels continued throughout the week, and many teams spent their evenings repairing minor damage, some others were not so lucky. “The water was down so low that several boats got destroyed,” Stephens said. “We were fortunate enough to get to fish all three days.”

The boys did rebound on the final day, catching two bass at 3 pounds and 13 ounces for a three-day total of 12 pounds and 1 ounce which kept them safely out of the bottom third. The boys also caught a Northern Pike, their first catch of the type as that fish does not range into Kentucky.

Regardless of final placing, the whole team in honored to have been represented at the SAF World Finals. “They take the top ten percent in the country. There’s a lot of schools that fish four years and never make it,” Coach Stephens said. “It was a great experience. We thank God every day that we made it up there safely and fished safely and got home safely.”

Next up for Russell County fishing is the Kentucky Bass Nation High School Qualifier on July 18 at Kentucky Lake and Lake Barkley. Coach Stephens believes three or four teams from Russell County may do well enough there to qualify for the KBN state championship on August 8 and 9 at Nolin Lake.

“I’d like to thank all the people who helped support the boys and allowed them to go,” coach Ste “First National Bank and the City of Jamestown donated money, Land Big Fish donated a rod for them to raffle off, Lake Cumberland Outdoors sold the tickets for them and donated some money. I want to thank everybody who purchased the raffle tickets.”