With the exception of re-imagined graduations and other informal and unofficial events, school and school-related activities in the commonwealth have been on hiatus since Friday, March 13. Near the end of May the KHSAA, following the directives laid out by Kentucky’s Healthy at Work initiative, announced the beginnings of a plan to reignite athletics programs in Kentucky.

Athletic directors and coaches spent the first two weeks of the month hammering out plans to keep Kentucky’s athletes healthy at practice before the three month dead period expired.

On June 15, players took to the field in organized activities. This week the Current spoke with three Russell County High School head coaches—Faith Womack of volleyball, Charlie Anderson of boys golf, and Ryan Richardson of football—about their first week back together with their players. 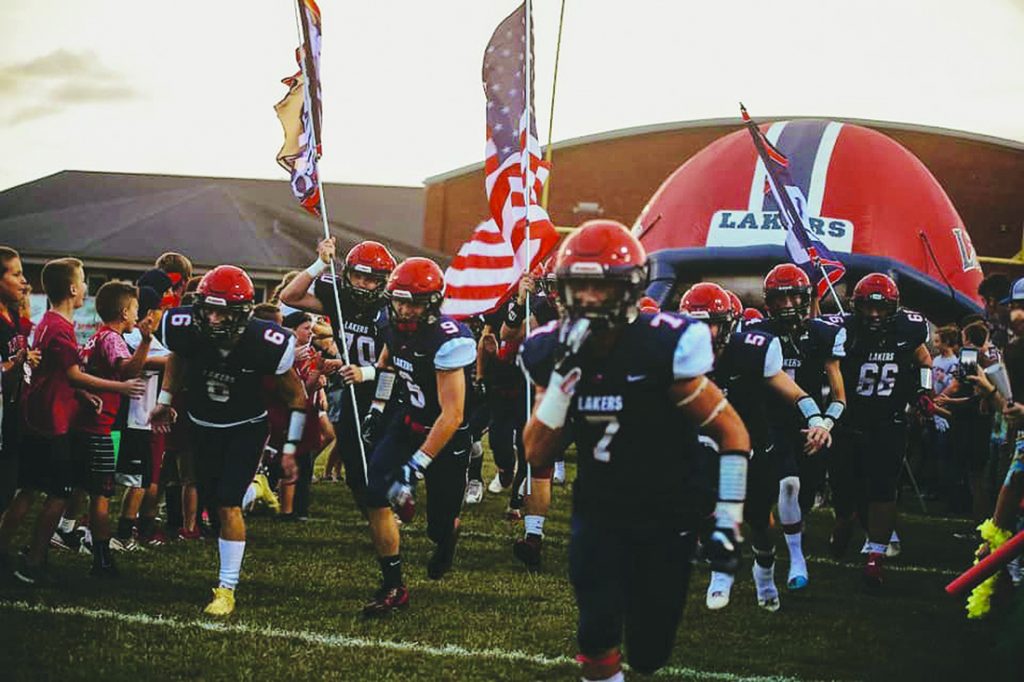 Before teams could begin workouts coaches had to submit plans of action to keep their players as safe as could be from exposure to COVID-19. Even while meeting outside in groups of less than ten, coach Ryan Richardson’s plan was still 15-pages long.

“It detailed everything from how the kids would arrive, to how we would check them in, to the groups that they would be in, and also the workouts that they would do,” Coach Richardson explained.

The RCHS football team is meeting outside across three evening sessions that start at 4:30. With 57 players on the active roster for the 2020 team, those sessions feature two groups apiece, one composed of linemen and the other of skill position players such as backs and receivers.

“What we’re doing right now will probably not help us win a game in the fall, but it’s for the kids to let them have a sense of normal routine coming back in, it’s not the football part of it, it’s the mental part of it,” Coach Richardson said. He noted that for three months area kids have been without anything that connects them to their regular routines and that there has been a real hunger among them to get out among their peers again.

When the players arrive at campus, they are subject to a temperature check before joining with their groups for exercises. While Coach Richardson monitors his team’s health and compliance his assistants are on hand to run the drills.

“We’re not using the weight room at all right now,” Coach Richardson said. “We’re doing a lot of plyometrics, explosive-type exercises. Our approach is that we’re not going to gain back in a couple of weeks in the weight room what we lost in the months of April and May.”

While he does envision the team getting back after the weights when Kentucky clears the benchmarks for Phase 4 of Healthy at Work, that is not the only concern where contact is concerned. Tackling dummies and blocking sleds and even footballs themselves are currently off the table and with every team taking so much time off this offseason, ball security and fundamentals are going to gain added importance.

“Unless you’re a kicker it’s hard to do anything with a football and have only one person involved. So hopefully we’ll be able to do more ball drills next week.”

For the time being, the Lakers are making the most of their time.

“We’re working on a lot of speed drills, box jumps, line jumps, a lot of footwork stuff. We do have some strength exercises we’re doing,” but the focus remains on exercises that can be done without equipment, maximizing the time the team gets together each week.

The earliest chance for the Mighty Lakers to move their squad into the weight room would be next week as the Commonwealth approaches Phase 4 of Healthy at Work, but with other states experiencing spikes during the course of their reopenings, nothing is guaranteed when it comes to the 2020 season.

“The people who make the decisions don’t even know,” Coach Richardson said.

“As a person, as the coach, I’m optimistic that we’re going to have a football season in the fall, I hope we do. It’s something that they need mentally as well as physically. I’m hoping that works out. I don’t know what it’s going to look like, but I’ve been optimistic since March 13.” 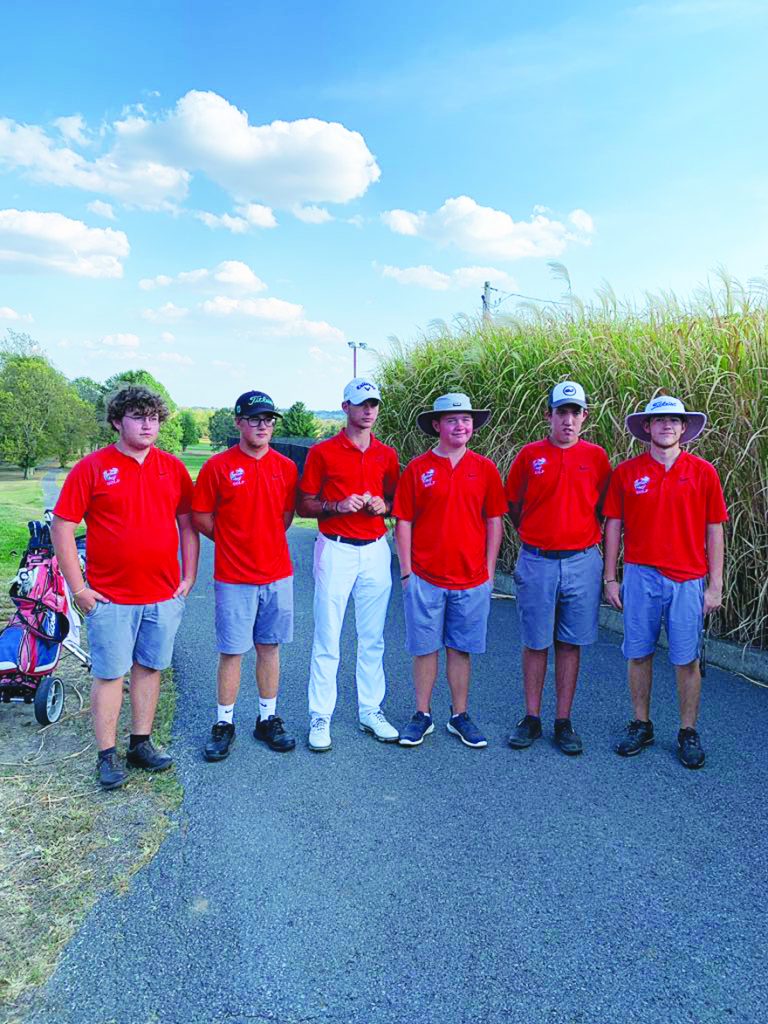 From the earliest speculation about the 2020 high school sports year golf has been singled out as the sport most ready to adapt to social distancing. Unlike other sports, golf is non-contact. There is no shared ball, the players generally play with their own equipment, and golf courses are designed for space.

While the team is not back together as a unit yet, they have stayed connected through the sport by way of outside tournaments and events that have continued while other sports have gone dark.

Because golf is so well-suited for social distancing, the sport itself has had months to figure out its points of emphasis. While full-contact sports are still negotiating their conditioning programs and awaiting much-needed guidance from decision-makers, golf already has many policies and plans in place, not just for their practices and conditioning, but also for their matches.

“It is an easy sport to make these changes and continue playing,” said head boys golf coach Charlie Anderson. The first changes he brought up related to specific areas of the game where players come into contact, not with each other, but with common features of the course.

The flagstick pole, which lets players find the hole from a distance, but is often removed during the short game phase of golf, will have to be left in throughout each competition and cannot be removed. Similarly, players will no longer be able to use the rakes to get their ball out of a bunker and instead must use their feet.

Instead of scorecards, players will now keep score using a scoring app such as Golf Genius or Blue Golf to record their strokes. “At a lot of tournaments, they are doing live scoring… so players can put in the score as they go. Live scoring is great because people who are not at the match can keep up with players and I like the idea of live scoring.”

Not only does it streamline the process of collecting scores, but it also avoids contact between players and scorers when cards would normally be handed in at the end of a round.

“We met as an athletic department a few weeks back and when the guidelines came out there were a lot of steps and precautions we had to take and implement,” Coach Anderson said. “Many of our guys are practicing and playing on their own since golf courses continued to be open, so I didn’t have any workouts with players.”

The RCHS golf team will come back together on June 29, and like the other sports limit their grouping size to fewer than ten players at a time. Temperature checks will be the norm as with other sports and school activities. “Students will arrive and leave in the same vehicle, players can’t take other players home that they didn’t ride with.”

While together golfers will still be limited in their exposure within their groups. “On the putting green, we are going to have just one player per hole, so players won’t be able to share a hole to keep the six feet distancing apart, but can still practice putting and chipping.”

Among the last details needing to be sorted is how the start of matches will work. A popular option would require teams to utilize shotgun starts where golfers start playing at every hole simultaneously rather than waiting in behind preceding groups. However these changes shake out, golf remains uniquely suited for the era of social distancing. 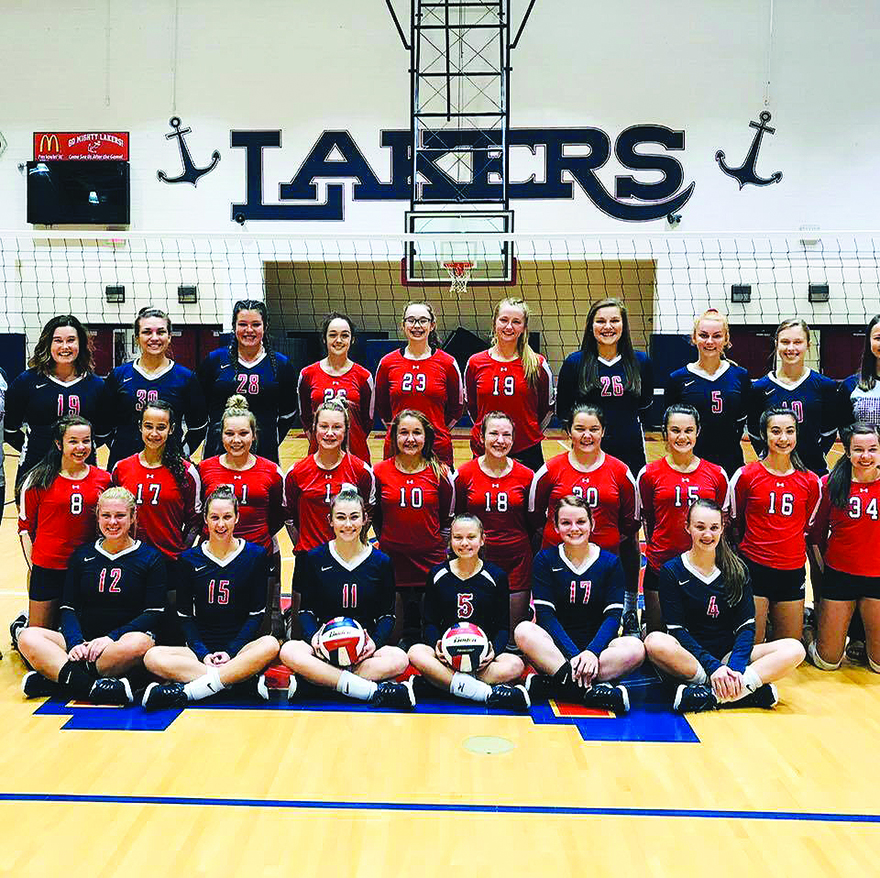 In early March Russell County head volleyball coach Faith Womack was hard at work designing an offseason regimen for her players. “Right after spring break I started sending out virtual workouts for the girls,” Coach Womack said. “My husband Adam is a Crossfit trainer at Dunamis Fitness [in Russell Springs]. He has always been a great help to me and we put our heads together and came up with a great training plan for the girls.”

The program focused on workouts that wouldn’t require gym equipment that most people do not have at home and could not have come at a better time for the team.

Three months later, the Lady Lakers are finally back together, though social distancing means they are still not all back together. Dividing a roster of 25 players into groups of fewer than ten has left Coach Womack taking on the junior and senior players and her assistant coach Macey Johnson taking on the freshmen and sophomores.

“Normally we’d be able to meet all together, they were just happy to see each other. They were trying to catch up on three months that they hadn’t seen each other. It was as much good medicine for me as for the girls for us to be all back together.”

With teams vying for even more tightly limited space and straining under strict regulations, the Lady Lakers have set up shop at Duramis, alleviating the strain on resources for the other coaches and programs.

“One thing that our athletic director, Mr. Carpenter, has promoted with us as coaches is to be flexible,” Coach Womack said. “There is still a lot of uncertainty going around and everyone is anxious and excited to be getting back together.

“These kids have been off for three months and we don’t want them to feel torn between their sports. The most important thing is that we’re starting, slowly but surely, to get into this new normal, we’re getting them back together with their peers as a team.”

Coach Womack credits her fellow coaches, especially coaches Billy Carson and Brett Blakenship and Teresa Ellis for helping make this process as positive as it can be for the students.

Coach Womack’s main concern in all of this has been the health, particularly the mental health of her players. While her training plans and state regulations are caring for the physical needs of her athletes, she is doing what she can to meet their social and mental needs. “We are a close-knit team. They love each other and we do things as a group.”

Leading the way for the players is a solid group of seniors: Ashton Baird, Julia Bault, Evan Hoover, Abby Loy, and Kylee Roy.

“I could easily say that all five of them are leaders, they are the core of the team, they are a great group and are all major varsity contributors. I’m really looking forward to a strong season having this experience and leadership.”

Every team in the Commonwealth is playing by the same stringent rules and every team is waiting for the next round of decisions from the KHSAA which are due out at the end of this month.

“I want the girls safe. I want our school and our district safe and compliant. The competitive side of me hopes that we can have a full regular season and not miss any matches. I hope things don’t get cut short.”