KC Farms is a local dairy owned by Dante Carpenter. The dairy was opened in 1947 by his grandfather, Chester Gosser. Photo by Jeff Neagle.

Farming is a family tradition often passed down from one generation to the next. While it’s true that many children of farmers move on to another career, those who get hooked on farming at a young age are in it for life. Dante Carpenter and his daughter Elise have it in their blood.

Just a short drive out Highway 910 in Russell County, sets KC Farms where owner Dante Carpenter is doing what he has done for decades, operating his dairy.

The dairy started operation in 1947 when Carpenter’s grandparents on his mother’s side, Chester and Eva Gosser, built a 25-stanchion barn and operated what became the first Grade A dairy in Russell County. At that time, his grandfather was a producer for Southern Belle. These days, Carpenter is contracted with Prairie Farms. He also serves as a district board member for the milk processing company.

Sitting in the barn his grandfather built 73 years ago, Carpenter recalled his life in the family business. “My grandfather and I milked Holsteins until about 1980 and then we stopped milking when I was gone to college. Then in about 1986 we decided to get started back into it again and we went with registered Jerseys at that time.” The milk parlor the family uses today was built in 1975, which makes it one of the older ones in operation in the county.

The family started back into dairy on a small scale. “We bought four Jerseys in 1987 and used the milk check to buy more and grow the business.” KC Farms has 85 Jerseys at the moment, but the number can fluctuate between 80 and 100. They also have over a dozen calves being bottle fed. Carpenter says they may milk a few for a little while, but he tends to cull pretty hard.

“We also sell a lot of family cows. A lot of people want old show cows, something they can lead or maybe milk for their family,” said Carpenter.

But the farm does more than just milk cows. “We are diversified. We actually have more beef cows than we do dairy. We raise our own corn and soybeans too. We use the corn here for feed for the dairy and beef cows and we sell some soybeans.” Tobacco was once a cash crop for the farm as well, but as with many other Kentucky farms, it is no longer part of the operation.

Carpenter has one daughter, Elise, who plans to follow in her father’s footsteps and continue the dairy operation. “Either you love it, or you don’t. You’ve got to have a passion for it,” said Elise.

Most of Elise’s time is spent at Wilmington College in Ohio, where she is a sophomore. She plays forward for the basketball team there. “I wanted to play ball and I got offers closer to home but none of them had an Ag program. I was looking for both and Wilmington was the best fit for me.” Her major is Agriculture Business and she says she’s looking forward to opportunities the degree will bring her, but she will look for something that allows her to continue working on the family farm, too.

Elise is one of those children who got farming in her blood early. She began showing cattle when she was very young and first showed at the Kentucky State Fair at the age of three. “We usually hit every fair since 1987, but this year is obviously different with the pandemic shutting most everything down.”

Carpenter says he would not be able to operate the farm without the help of two valuable men. Jason Lawhorn has worked at KC Farms for twelve years and Wendall Walls has worked there for about six years.

“Everyone here can do everything; nobody just does one thing. If somebody is sick or off for the day, we can still get it covered,” said Carpenter, who is often on the road due to his duties with Prairie Farms.

“I enjoy it here,” said Lawhorn. “I enjoy the work and we all get along well. He’s good to work with and everyone is good company to be around at work.” He added with a laugh, “And I like to give Elise a hard time.”

“I don’t think in 12 years we’ve had any real disagreements,” added Carpenter. “Jason and Wendell are both great guys and I appreciate all they do. Without them I might not still be in business.”

As great as things are, farming is not always an easy life.

“We’ve certainly had our stressful times,” said Carpenter. Personal stress came earlier this year when he lost his mother, Garmoline, in April. The COVID-19 restriction meant that it was a much more solitary period without the presence of many friends. He lost his father, Kamos Carpenter, in 2005.

Farm difficulties are often more lingering. “It’s a fine line. A new tractor to us is a 1980 tractor. We prefer to utilize what we have. We could go into debt and upgrade a lot of things, but we make the best with what’s here.

“We still use the upright silo to feed cows in the parlor year-round. Some people will probably laugh at this,” said Carpenter, “but I’ve pretty much used the same feed ration for 30 years. I don’t change much as long as everything is working. Our cows aren’t pampered, but they are taken care of. We aren’t as modern as some, but the cows come first.”

About the only thing he would change would be to cut down on milking time. “We milk four at a time and it would be nice to double that up, but we have done it this way a long time. It isn’t that bad.”

One thing he definitely doesn’t see changing is his partnership with Prairie Farms. Carpenter says, “With Prairie Farms, I feel secure. They are expanding and have bought 12 Dean’s plants.  We get a good price with them, as good as any company out there. You don’t see any milk dumped with them. The end result is we’ve got a good processor.” Earlier this year, some farmers in the Midwest were dumping milk because their milk was not being picked up.

Carpenter says the price he’s paid for his milk has dipped some during the pandemic due to schools being closed, but the company has found a place for his product to go by reaching out to do some good during the shutdown period.

“Prairie Farms has stepped up to help people in need during the coronavirus. Just a few days ago, 1,256 boxes of products were distributed here in less than two hours to families in need. The boxes had two gallons of milk, four pints of flavored milk, cottage cheese, butter, French onion dip and sour cream. They’ve partnered with the USDA to help provide for families during this time. They are good people from the top down.” The Kentucky Dairy Development Council (KDDC) along with the local health department helped with the distribution and Owens Trucking provided the truck to pull the trailer.

When not working on the farm or attending to his duties for Prairie Farms, Carpenter says he really only has one leisure activity. “I go watch Elise play ball. When she’s playing, we’ll double up to get everything done here so I can get to her game.”

But as he reiterated, he wouldn’t change a thing. “Farming, and dairy farming specifically, is rewarding but it can be stressful. For me, the rewards outweigh the stress. This is a lifestyle you get used to. If you don’t know anything else, you don’t miss it. And there’s always something new. I am looking forward to Elise graduating and being back down here full time. But I’ve said, the real education comes after school, just like it did for me. She enjoys it as much as I do, so I know it will be in good hands.”

Dairy farms are shrinking entities. According to the KDDC, there are only 16 dairy farms in Russell County today. Carpenter said there were 300 when his grandfather ran the dairy. Of the 16 in the county, Carpenter said he believes 11 of those are partnered with Prairie Farms.

With an eye toward the future, Carpenter seems to feel his dairy business will go forward without much change. “I love doing this. You invest too much not to love it. I love having Elise here with me in this. With Jason and Wendell, I’ve got good help. As long as I’ve got all that, we will not be going away.” 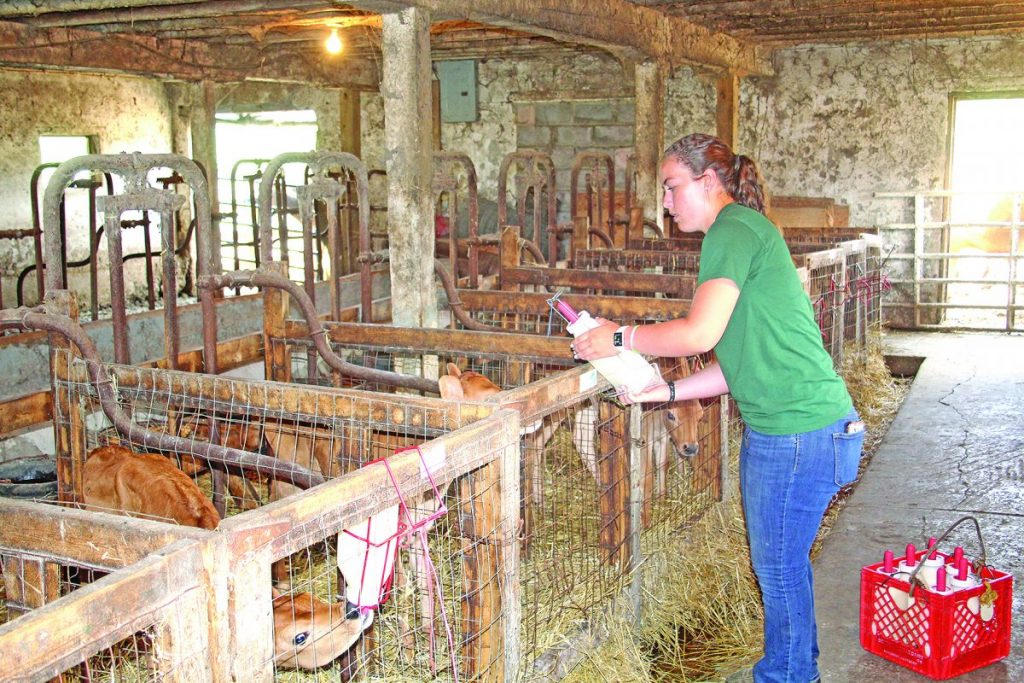 Elise Carpenter handles the bottle feeding for the most recent calves. The farm has over a dozen calves being bottle fed. Photo by Jeff Neagle. 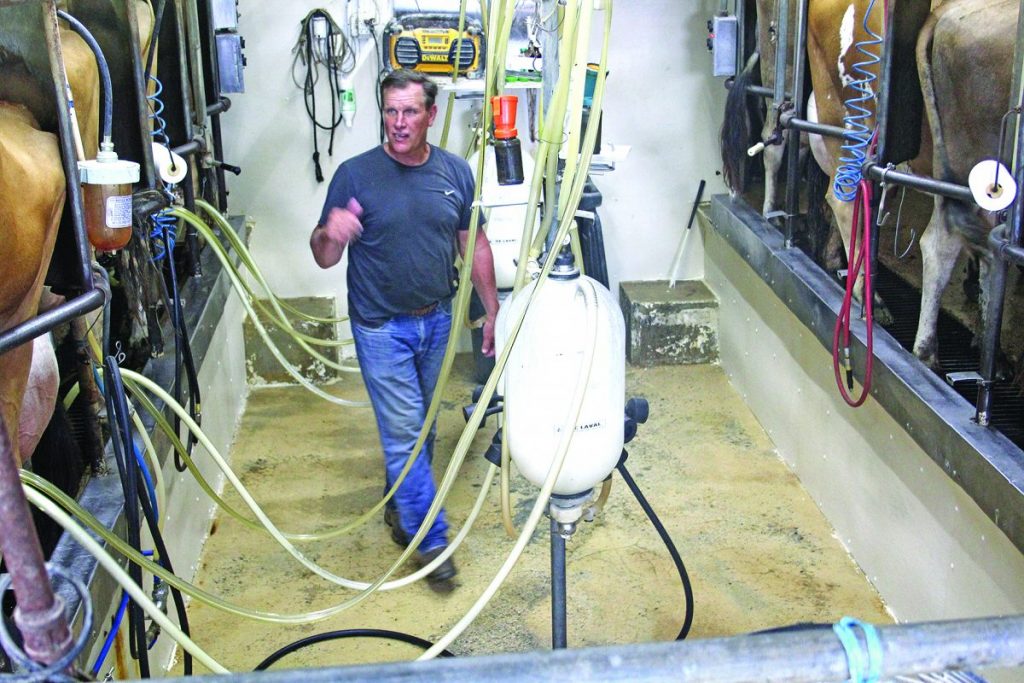