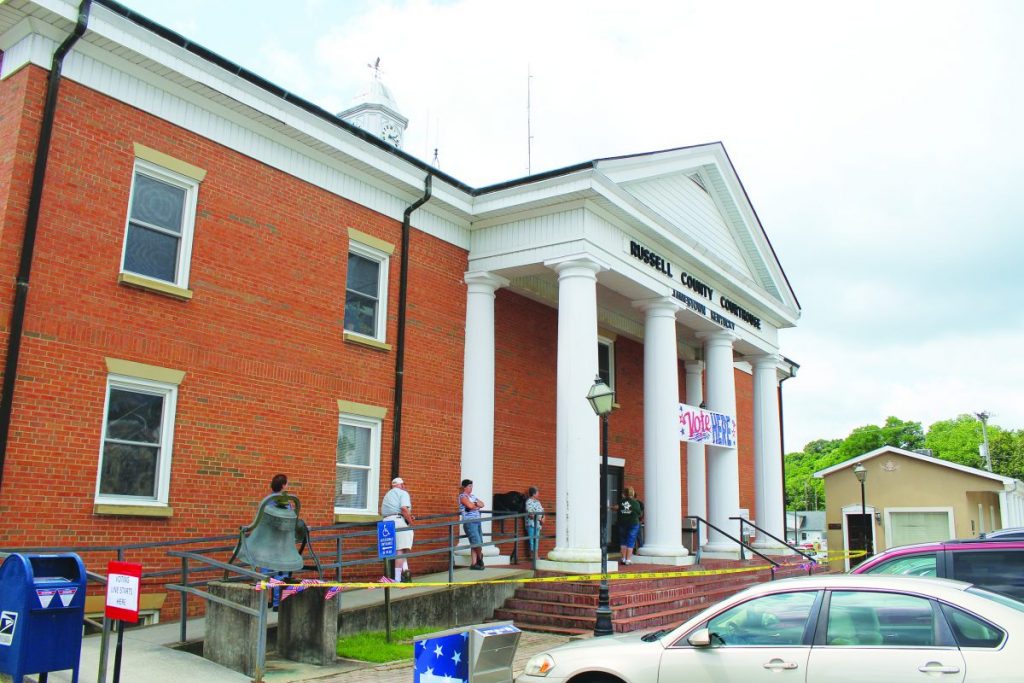 Voters gathered throughout the day on the steps of the courthouse to cast their votes in the Democratic and Republican Primaries. Photo by Drew Bergman.

On April 23 of this year Governor Andy Beshear and Secretary of State Michael Adams reached a bipartisan agreement to modify Kentucky’s 2020 primaries so that voters could exercise their right to vote safely. On Tuesday in Russell County that is what happened.

With at least 2,000 of Russell County’s more than 14,000 registered voters availing themselves of expanded early and absentee voting, those who had not yet sent in their votes gathered at the Russell County Courthouse in Jamestown to exercise their right.

Dawn Shaw from Estill was on hand as her daughter, Maddie, voted for the first time. “We voted earlier, my husband, my son, and I and she was at work, so she came today to vote.” Dawn described her experience with early voting as fantastic. “We were through in five minutes. They were really safe, sanitized our hands, did electronic signing and were great.”

“It feels good,” Maddie said of her first time voting. “I haven’t been a part of a big vote, a big decision like this and it feels good to be involved.”

“We’ve had a good turnout,” said Ruth Hill, a veteran poll worker who has been on hand throughout the primary season to help area voters. “It’s moved smoothly.”

The line kept a steady pace throughout the day, picking up at regular intervals not unlike in regular elections, with lines forming early on, again around lunch, and finally after 4:00 as people got off work.

Even with all the information that has come out from local and statewide media and officials, there were still a handful of voters who were unaware of the changes in this year’s locations. Fortunately for them, staffers were able to direct voters into the polling location.

“When you first come in they check your temperature and give you your hand sanitizer,” Ruth said, explaining the process. Fortunately, Ruth said that nobody had come in with an elevated temperature.

After the initial check-in and masking, voters’ IDs were scanned to quickly verify their identity in a move that thrilled Karen Bledsoe of Russell Springs. “The voting experience was excellent, they asked for my ID, which I think every American person needs to show their ID,” Karen said. “When I came in I had to put my mask on and they gave me some sanitizer for my hands, I went to the first booth, signed in and showed my ID, then went to the second part where I gave them my ticket and they gave me the ballot to vote, I voted, scanned it in and went right out the back door.”

The ticket Karen referred to was one given to every voter to identify them as either a registered democrat or republican so that at the next station, the poll worker could give the voter the proper primary ballot.

From there voters were taken down the hall to the voting booths (which were set six feet apart) to vote as normal. Constables were stationed at exits to save people having to touch door handles on the way out.

“It’s been historically different,” Ruth said. “With our portal absentee ballots went over very well and with [being open] two weeks prior we had a lot of people vote early and we’ve had a really good turnout today, too. We usually have a better turnout compared to [elsewhere] in the state.”

State election results will not be available until next week as clerks make allowances for late-arriving absentee ballots. Absentee ballots were accepted in a secure box outside of the courthouse on Tuesday in addition to being accepted through the mail so long as they were postmarked by Tuesday.