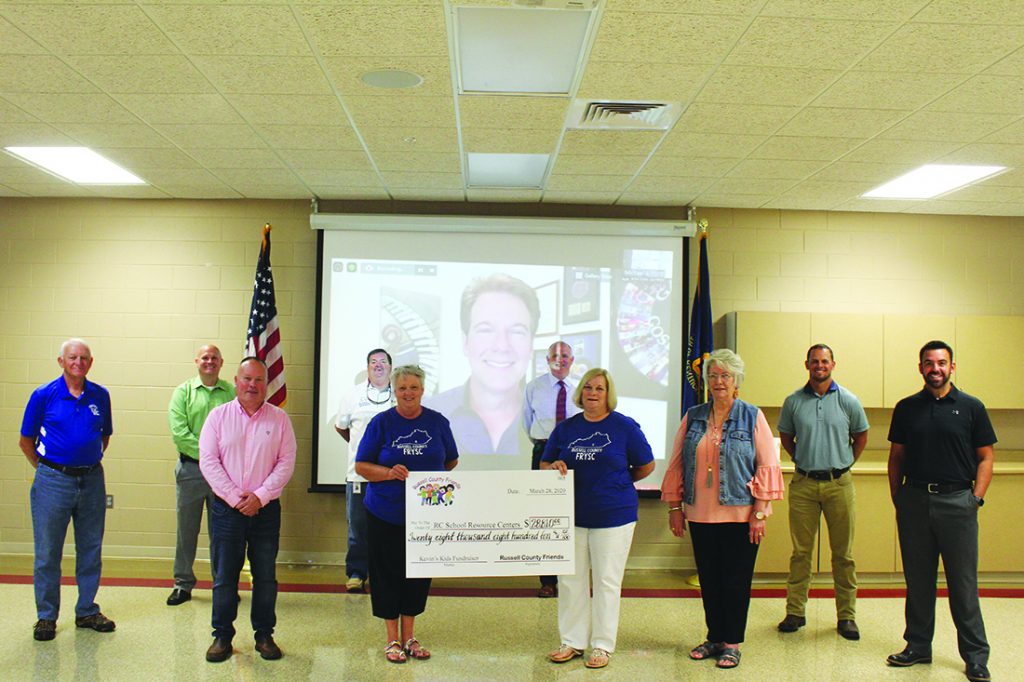 Educators and leaders from across the area joined with Kevin Williams (screen) to present the area Family Resources Centers with a check in support of their work. “It’s all for the kids,” said Sherry Coffey, the coordinator for RCMS and RCHS.

For the past six years musician Kevin Williams has held a concert at Russell Springs First Baptist Church in support of Kevin’s Kids, an organization that supports economically disadvantaged children in Russell County.

Williams is a member of The Gaither Vocal Band, a Grammy and Gospel Music Association award-winning southern gospel group with nearly four decades of success behind them.

“Kevin’s originally from here, and he came to us,” said Superintendent Michael Ford. “He knew he wanted to give back to this community. He leads it, it all happens with him, we’re just the beneficiaries of his work.”

“This all goes through the student resource centers at the schools,” said Jo Nell Smith a retired music teacher who taught Williams when he was a student in Russell County.

“It supplies for the needs of the kids of Russell County,” said Gordon Lester, the director of family resource for Russell Springs and Salem Elementary. “That can be anything from food or clothing, hygiene items. Anything to help a kid be able to come to school adequately.”

The 7th Annual Kevin’s Kids Concert was supposed to have taken place on Saturday, March 28, but like most everything else this spring, it was canceled due to the novel coronavirus. Despite not having the charity’s benchmark event, Kevin’s Kids still managed to raise $28,000 this year, and has now raised over $300,000 for Russell County children over the past seven years.

“The money goes into a protected account,” said Superintendent Ford, “so it can only be spent for what [the resource centers] approve it for.”

While the amount raised is not to the level it has been in the past, Kevin’s Kids still being able to raise $28,000 is still a feat Williams describes as “monumental.” Keeping things in perspective, Williams pointed out that being able to raise these amounts out of a county of only about 17,000 people is still encouraging and something to continue to carry forward in the years to come.

“Boy, this doesn’t look like anything we’ve done in the past,” Williams said from his home as he was projected onto a screen in the Russell Springs Auditorium-Natatorium Complex. “We would get together and present a check in the foyer right outside and everybody would be loving on one another and hugging and shaking hands and posing for pictures all squeezed up and that’s not what we’re seeing today.”

Spread out around the community room, watching his remarks were the mayors of Russell Springs and Jamestown, Eddie Thomas and Nick Shearer, Superintendent Michael Ford, Ryan Coffey and Christian Naylor, the pastor and youth minister of Russell Springs First Baptist Church were all on hand alongside Sherry Coffey, Sherri Selby, and Gordon Lester, all with the area student resource centers.

Williams was raised in a trailer park on Hale’s Highway and knows first-hand the importance of community support for impoverished children. “I’m grateful for all of you being here and showing up,” Williams said.

“This is a community work, we’re just honored and excited to be a part of that, to walk with you guys hand in hand and step by step,” said Brother Coffey. “As the host church, we were excited to play a big part in this, but we also know that we are just part of a community effort. I am blessed to live in and serve a community that cares about its own, that takes care of its own, and has the backs of kids.”

“There’s a coming together and a unification in our community,” Williams said. “About one out of three kids is in poverty right now. That’s high compared to the national statistics, about double that. We started [Kevin’s Kids] with this in mind, to reach those kids that went unnoticed.”

The unifying philosophy is that with Kevin’s Kids raising money in support of the Family Resource Centers, enabling the centers to intervene in their lives and provide these children with services then the children can find hope where it is lacking and to feel a part of the community that they too easily see themselves as being outside of.

“This is a time when 44 million Americans are unemployed,” said Williams. “We have unprecedented economic challenges. We have a worldwide pandemic and yet there is one county in Kentucky who is getting together today to present a check to the generations of tomorrow.”