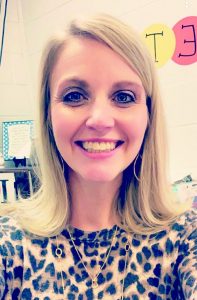 Campbellsville University has honored Susan Gossett Walters of Russell County Elementary School with their 2020 Excellence in Teaching Award. This is the 34th year for the award program which recognizes teachers across 76 school districts for their efforts with students.

Normally, the awards are given out in a ceremony in the late spring, but as Mrs. Walters explained, “With COVID-19 celebrations have been on a different level.”

Mrs. Walters had been informed about the honor back in late March, two weeks after the state suspended in-person teaching for the remainder of the 2019-2020 scholastic year.

How Mrs. Walters adapted to the challenge of such an abrupt change speaks to the qualities that earned her the award. “So much of teaching is building that relationship,” she said. “That student-teacher rapport is irreplaceable. I’ve always said teaching is kind of like a talk show, you know what the content is, and you want your audience to come away engaged, interested, involved, and with something they can take with them.”

Overcoming the necessary distance between herself and her students required creative problem solving on Mrs. Walters’ part and still came down to a simple precept, be kind.

Mrs. Walters has been teaching at RCES since 2000 and her commitment to the students there continued to shine as she joined with teachers across the district to help the classes of 2020 be cared for even without the normal year-end fanfare.

“We put out little signs in their yard, ‘Russell County Middle School here I come!’ and so each student got that and it was a neat way to end the year,” she said. The signs could not replace the experiences of transitioning to the next level, but that does not mean they were not worth the effort as students saw first-hand their teachers and administrators pull out all the stops to try to salvage unique moments to make up for the traditional ones they were denied.

Looking forward, Mrs. Walters is committed to continuing to serve and engage and inspire her students regardless of the form that fall classes take. “As clichéd as this is, it’s a new normal and we’re going to have to think out of the box,” she said.

“A digital platform is something that I think is in our future. It’ll take showing a lot of grace to parents and students and teachers and bus drivers and making sure that we are all sowing kindness like confetti. It’s on the wall in my classroom and something we’re going to have to keep reminding ourselves of. We’re in uncharted territory.”

The Excellence in Teaching Award is open annually to nominations for teachers in the preschool and elementary, middle, and high school levels. “Each year Campbellsville University opens up and we as teachers receive information on how to nominate someone if we’d like to,” Mrs. Walters said. “I don’t know who nominated me and I’m okay with that. It’s such an honor to even be thought of.”

By the time Mrs. Walters and the other award winners had been notified, CU’s plans were already being adjusted to fit the new reality. “There was supposed to have been a lovely dinner and program in April, of course all of that wasn’t able to be. But I did receive a nice letter and I am told our pictures and our names were shown on WKYT in some of their primetime spots.”

In 2018 Campbellsville University was ranked 24th nationally in early childhood education programs and first in Kentucky by BestValueSchools.org and 21st nationally for best online colleges for teaching degrees by GuideToOnlineSchools.com who also ranked them third in Kentucky in the same category.

The award committee is made up of faculty and staff of the school of education and early childhood program.