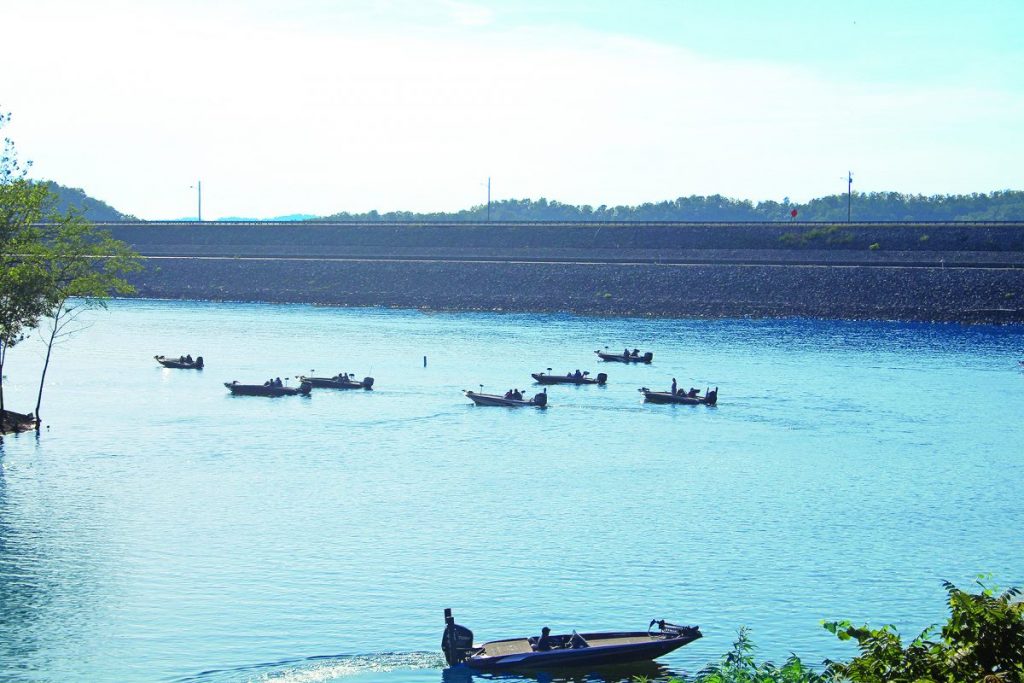 Boats gathered at the starting point in the cove at Halcombs Landing Friday evening for the Jaycees Fishing Tournament. The event ran from 6 p.m. until 2 a.m. Photo by Jeff Neagle.

Friday evening provided perfect weather for the second Russell County Jaycees Fishing Tournament on Lake Cumberland. Nine boats participated in the event, which drew competitors from around the region.

Teams of two gathered at Halcombs Landing ramp at the dam for the 6 p.m. start on Friday and returned to the ramp at 2 a.m. early Saturday morning for the weigh in. The anglers were limited to Largemouth Bass at a minimum of 15 inches, Smallmouth Bass with a minimum of 18 inches, and Kentucky Spotted Bass with a 12-inch minimum.

Jeremy and Justice Heath won first place in the competition and took home the $500 prize with a weigh in of 12.11 pounds. The $300 second place prize was claimed by Barry Snell and Jeff Byrd with a total weight of 11.4 pounds. Justin Byrd and Barry Stunk brought in 9.46 pounds of fish to take the $100 third place prize in the competition. The Big Fish Pot of $90 was won by Jeremy and Justice Heath with a 4.57 pounder.

New Russell County Jaycees President Bradly Anderson said, “Teams were allowed to go anywhere on Lake Cumberland they could get to and still get back in time with their fish. We didn’t have any restriction on them in that way.”

However, the event didn’t go off without a few changes. When teams arrived, they were asked to remain in their vehicles while a member of the Jaycees, wearing their PPE, went to the vehicle to register the entrants. Boats were then unloaded, and each team waited in the cove for the start time.

Anderson was pleased that the event was still able to be held. “We weren’t sure what kind of response we would get but I think it has turned out pretty good considering all the circumstances.”

As with many other groups, the pandemic has limited the civic organization this summer. The Russell County Fair has been postponed indefinitely. In addition, the April 4 Spring Derby was cancelled, as was the Coyote Hunt scheduled for late March.

Anderson said the organization is hoping to add some new events in the coming year to expand their reach into the community.

“Right now, we do several events such as the fair, the demolition derbies, Toys for Tots, the Back to School Bash which was hosted at the fairgrounds the last two years, and we participate in Trunk or Treat. But we are looking to expand our events to allow more people to take part,” said Anderson.

David Burke, the outgoing president of the Jaycees, said he has confidence in Anderson and thinks he will do a great job. “He’s looking to start new events and is looking for input from the community on what they would like to see. We are here to serve the community and getting ideas from everyone is the best way to make sure we get more involvement.”

To keep up with what is happening with the Jaycees and their events, check out their Facebook page for updated information.