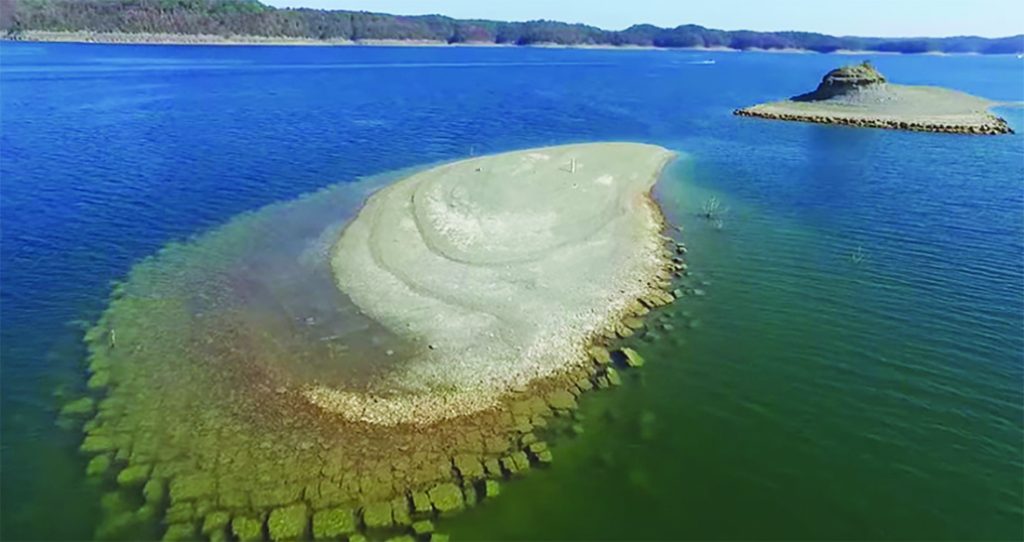 According to Fish and Wildlife officials, Guan Lian and Yanqi Xing attempted to swim out to Cemetery Island Friday evening. Their houseboat, which was not anchored, drifted away and the two young men drowned attempting to return to it.

On Friday evening four friends down from Miami University in Oxford, Ohio rented a houseboat on Lake Cumberland. Hours later, two members of the party were rescued by a passing boat near Low Gap; their own craft was adrift on the water and their friends were nowhere in sight.

Around four o’clock Guan Lian and Yanqi Xing, both 23, left their houseboat to go for a swim. According to Officer Zach Carney of the Department of Fish and Wildlife, the two young men took to the water with the intent to swim out to Cemetery Island. At some point Guan and Yanqi realized that they could not make the swim out to the island and turned back.

Unfortunately, their houseboat had not been anchored and was floating adrift on the lake. “The wind was blowing the boat away from them,” Officer Carney said. Eventually the two young men tired out and drowned.

Normally, Cemetery Island is well out of the water this time of year, but with water levels still elevated, only parts of it were visible. The location is noted for its historical interest. Before the Corps of Engineers built Lake Cumberland 70 years ago, the site had been home to a score of graves that were relocated as part of the construction.

Shortly after, the survivors – two other recent graduates of Miami – were rescued, Officer Carney spoke with them to try to determine not only what had happened, but also where it had happened.

“Most of the time when you have a drowning, they are swimming in an area and that’s where they went down. With this you had where the boat had drifted, where they had gone in at, where they made it back to,” Officer Carney said. These factors led to a more generalized search of the area than normal with officials from Russell County and Wayne County dragging the lake until dark on Friday night.

“We have GPS coordinates we pulled from the houseboat,” said Officer Chris King, also with the Department of Fish and Wildlife. “We determined how far away the boat had gotten from the recovery [site].” However, that information did not give investigators a clear idea of how far the boat had actually drifted while Guan and Yanqi were in the water.

“What it boils down to is they were without floatation devices,” Officer King said. “The message that needs to be out there is that when swimming without a personal floatation device, simple fatigue causes tragedy.”

When the search resumed Saturday, officials with Fish and Wildlife as well as Jamestown, Russell Springs, and Russell County Emergency Services had arrived and reached out across the region, pulling in aid from the Boone County Sheriff’s Office, Wayne County EMS, Somerset EMS, as well as other teams from Pulaski County, Barren County, and two teams from Christian Aid Ministries (CAM), a nonprofit aid program that assists with a range of services including search and rescue.

“We work with emergency management directors,” said Kim Eichorn of Christian Aid Ministries. “We have 23 teams that keep in contact with local officials in the states. We draw our volunteer pool from churches in each of our states, and we enable our local churches to help their neighbors.”

With such a wide area to search, the first signs of Guan and Yanqi did not come until Sunday when the CAM search and rescue team from Tennessee finally caught an indication of the location of the young men on their sonar.

“They picked up a few images we believed to be the bodies,” said H.M. Bottom, the director of Russell County Emergency Services. “We communicated between the other agencies to try to try to verify with our sonar that we had found them.”

Officer Carney said, “The lake was so deep [in that location where] they had picked up the imagery of them and identified it to be two bodies. But it wasn’t until early in the morning that we were able to actually bring them up.”

“What really helped us was the Christian Aid Ministries Search and Rescue,” Officer King said. “They are the ones who did the recovery and they were outstanding.”

By about five o’clock Sunday, additional sonar probing had confirmed the location of Guan and Yanqi. The CAM team from Ohio piloted their Remotely Operated underwater Vehicle (ROV) down about 150 feet deep into Lake Cumberland and by 2:30 a.m. Monday morning had recovered both bodies.

Shortly thereafter the two survivors of the party were contacted to make a positive identification of Guan and Yanqi. Russell County Coroner Mark Coots determined the preliminary cause of death for both young to be accidental drowning.

The families of Guan and Yanqi have been notified of the tragedy through the embassy and arrangements have already been put into motion to return the young men to their home country.

Carole Johnson, spokesperson for Miami University, expressed the school’s sadness at the loss of Guan and Yanqi and said that Miami is “providing counseling to students through the H.O.P.E. (Help Over the Phone Everywhere) Line. It is available 24/7 for students to call for immediate support.”

Management of Jamestown Marina declined to comment for this story.