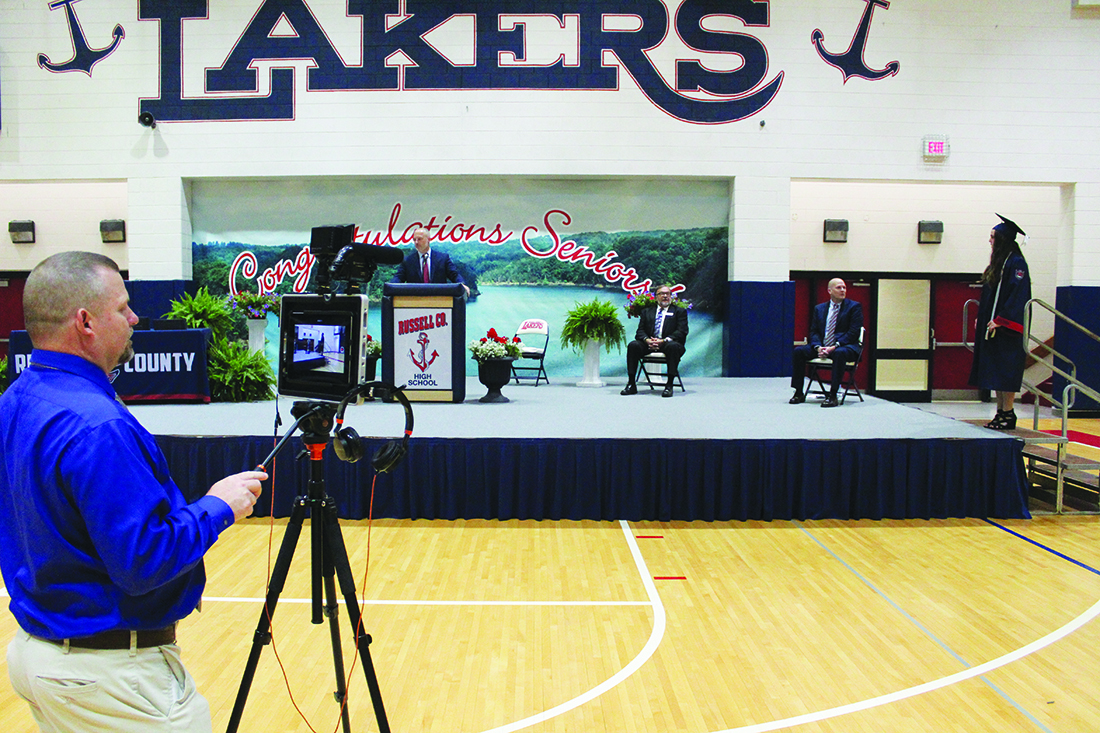 Normally a graduation takes two or three days to rehearse for, but in the spring of 2020 it took three days to complete. Making the best of a bad situation, Russell County High School’s community banded together to bid farewell to the class of 2020.

“We started about two weeks ago,” Assistant Principal Anthony Darnell said. “We got some guidance from the health department and the state on what we were allowed to do for graduates.”

From there, school administrators met with the student body leadership to hammer out the specifics. “We had three Zoom meetings,” Principal Darren Gossage said. “The students wanted to do something as close to traditional graduation as they could. This was about as close as we could get it.”

Early plans included the possibility of a drive-through style service, but students were keen to avoid that, preferring to keep the graduation in the gym.

Robin Rixon, the college and career counselor at RCHS sent the students a link to an online document that allowed students to schedule their preferred time for graduation. Each appointment slot allowed students a five-minute window for them (along with four of their closest loved ones) to participate in the graduation.

“We’re thankful to the graduates and their parents,” Darnell said. “They’ve been on time, being fifteen minutes early as we requested.  Nobody has complained, I’ve had several people comment that they prefer this in a way because they don’t have to sit in a hot gym, they don’t have to wait for their kid. They just come in and within five minutes we can complete the process.”

The on-campus process began as student resource officers greeted students around the side of the main school building, giving them a moment to pose outside before their last gander down the halls. Once inside, those in attendance underwent temperature checks before being ushered to assigned classrooms to await their turn.

Each day more than 20 faculty members worked six-hour shifts helping guide students through each step. They worked signing students in, ushering them from one station to the next, informing the families of the procedures, and helping keep the flow of graduates moving.

Along with the faculty was Ms. Patty Meece, the district health coordinator who was on hand throughout the graduation to assist with the school’s compliance. 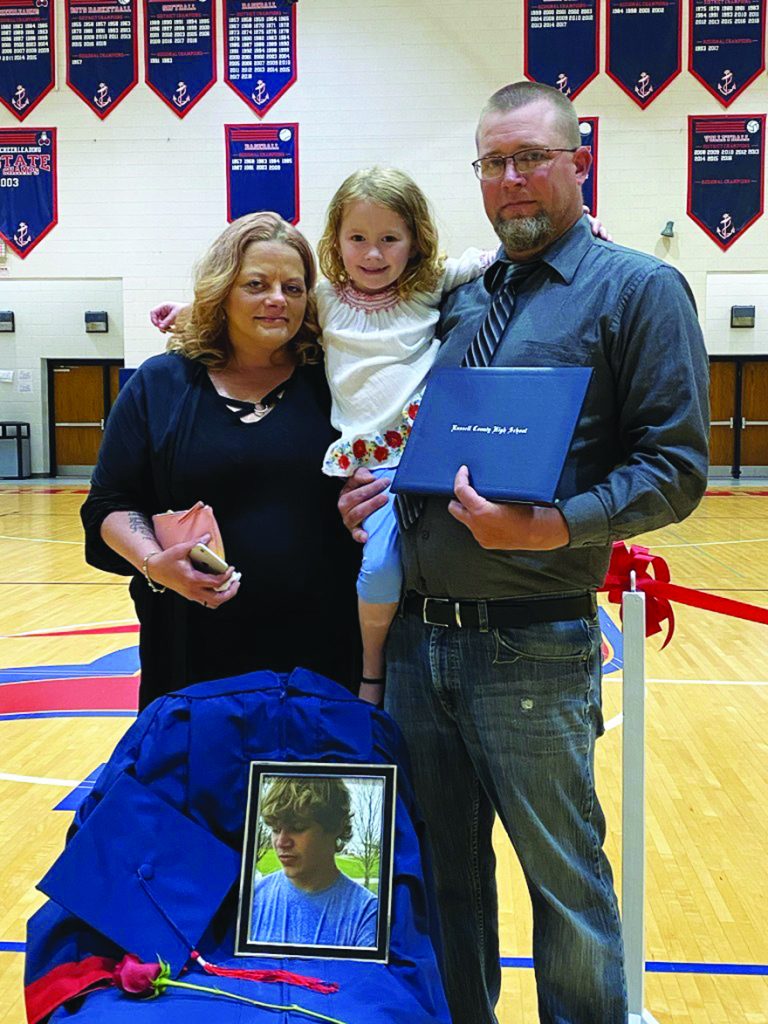 Latisha and Richard Walters and their daughter Chaselynn Brower stand at the memorial for their son, Ricky Walters, who would have graduated this year. “He was a great kid,” Assistant Principal Anthony Darnell said, “and unfortunately we lost him early, but we wanted to commemorate him. And we wanted to have it out so the other graduates coming across could be able to see.” Photo by Michael Ford.

“The health department reviewed our plan after the high school worked on it,” said Superintendent Michael Ford. “They blessed it.”

That plan also called for further support beyond the work of the faculty. “Our administrative staff, which is made up of our principal, our assistant principals, our counselors, our librarian, our yearbook/ media person, have reported they’re staying all three days,” Assistant Principal Darnell said.

And none of the plans would have come together without the work of the school’s custodians. “Our custodial staff has been phenomenal,” Darnell said. “They’ve been on hand throughout the entire event. So any [surfaces that are touched] are getting cleaned as well just as soon as people are through.”

For his part, Superintendent Ford greeted students as they came to the stage along with vice chairman of the board of education, Richard Kazsuk. “They told us because we were all spaced six feet apart we could be up here without our masks on. It’s been exceptional.” To maintain continuity in the graduation video all three men spent all three graduation days in the same suits.

This year’s graduation presented many obstacles, but it also afforded rare opportunities, such as second chances for speakers and students. Commencement speeches were recorded ahead of the graduation proceedings, “I got it in the first take this time,” Principal Gossage said, “normally I mess up.” Speakers weren’t the only beneficiaries of the second chances afforded by the special ceremony.

“And we’ve had a few students who needed that,” Superintendent Ford added. “Maybe the camera messed up, or they forgot to get their cords on, so we’ve had the opportunity for them to go back through. There are some advantages.”
While close family were allowed in to take photos, the school still provided each graduate with an 8×10 graduation photograph on their way out.

Another 8×10 was along for the entirety of the graduation. It was a portrait of Ricky Walters, a member of the class of 2020 who was lost too early. The portrait was part of a memorial the school set up alongside their video camera where passing students could look to and remember their classmate.

The video of the graduation, as well as the high school yearbooks, will be available sometime later in the summer and will be announced through RHCS’s many social media pages.

Though the class of 2020 had their final year of high school cut short, their legacy will be one of perseverance and embodied in this ceremony which made the most of what was available and found a way to keep the class together even as they are apart.
“This has gone off so well because the high school has prepared so well,” Ford said. 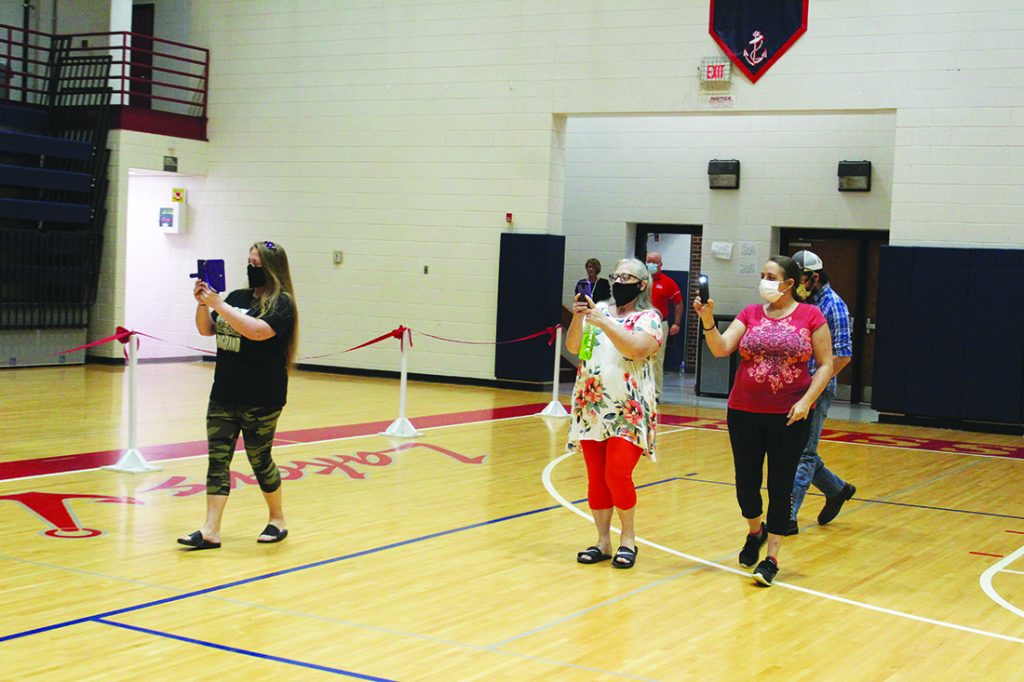 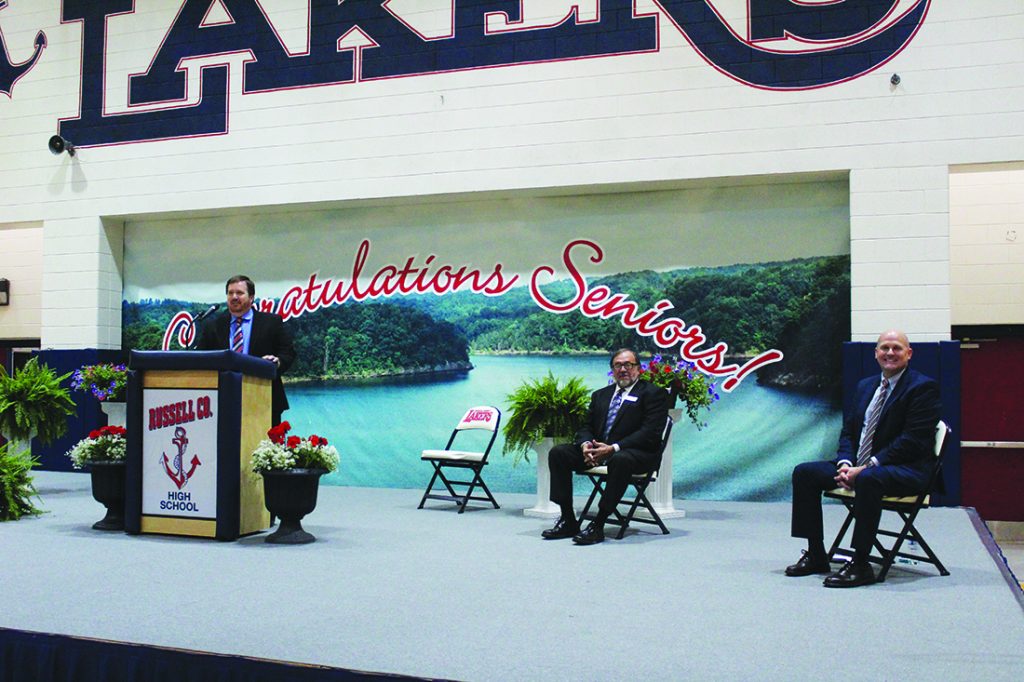 Principal Darren Gossage, Board of Education Vice Chairman Richard Kazsuk, and Superintendent Michael Ford spent three days in the same spots in the same suits to maintain continuity for the recording of this unorthodox ceremony. Photo by Drew Bergman.