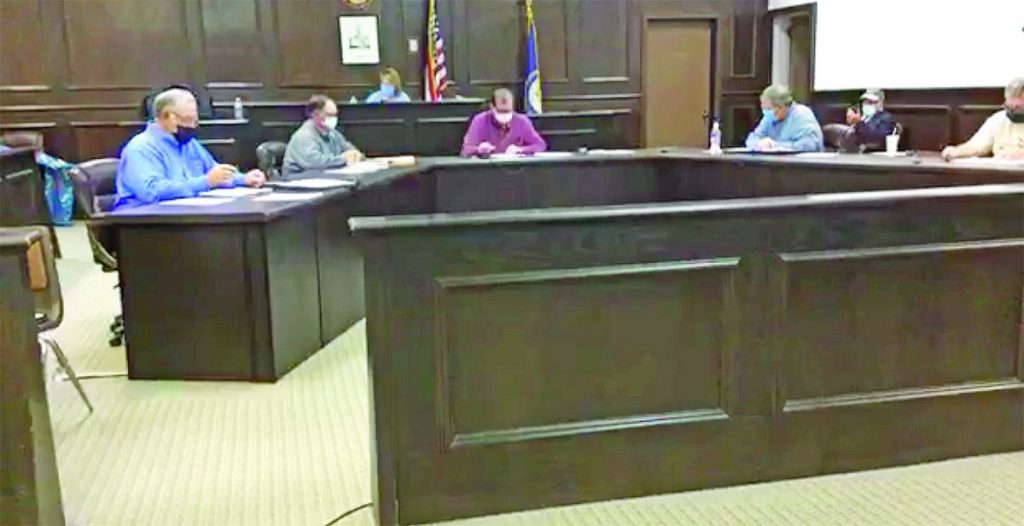 On Monday, the Russell County Fiscal Court met with masks and social distancing as they discussed the budget for next fiscal year.

The court had the first reading of Ordinance 20-02 to set the 2020-2021 budget. “The budget committee met on April 30 of this year and went over line item by line item…and we sort of pre-approved a budget and we are having the first reading. The budget went up a little over a million dollars from last year but that’s all in airport grant monies. If that were taken out I believe it would be about the same as last year’s,” said County Judge Executive Gary Robertson.

Overall, the general fund decreased a small amount and the road, jail, and dispatch all went up slightly.

The road fund was short nine percent this year and it is possible that the final 10 percent of funds from the state may not be coming. The coming year’s road fund increased by $20,179, but there is less money, causing the need to move some money from the general fund to the road fund. The COVID-19 pandemic has caused an issue with road funds from the state. With travel being restricted, state road funds are taking a hit because the state tax on gasoline contributes to the road fund. With fewer people on the road driving, the tax collected has decreased significantly.

The June meeting will have the second reading of the budget.

In the Jailer’s report, Dunbar said that the average daily population at the jail was 91. As of the meeting Monday night, there were 55 state inmates, 6 Clinton County inmates, and 28 Russell County inmates for a total of 89.

The court then heard the first reading of Ordinance 20-03, a budget amendment for this fiscal year. The amendment is for unbudgeted receipts.

The court voted to approve the payment of $50,000 from the grant fund to the bank for the sheriff’s vehicle grant.

The fiscal court opened bids for all janitorial supplies. The court voted to accept the bids from both suppliers to allow them to purchase the cheaper items from whichever company had the best deal on needed supplies.

Bids were then opened for fuel, oil, chip and seal, hot mix, blacktop, pothole patch, rock and tile. For fuel, the board received only one bid and voted to accept it. The bid was from Southern Petroleum.

A bid was accepted for tiles from Atwood Concrete Products and Plumbing Supplies in Liberty. The company will be considered along with the three local building suppliers and the court will go with the best price among them all.

Hudson Materials submitted a bid for roadwork oil that was accepted.

Gaddie Shamrock’s bid for chip seal was accepted, but their bid for gravel and hot mix were denied. At this time, the court has no contracts for either of these items.

The court approved payments to the library and the Russell County IDA.