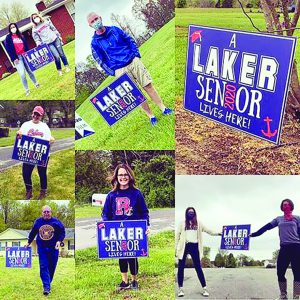 The faculty of RCHS pitched in over the past week to not only help make these signs a reality, but also to deliver them. Left column (top to bottom): Devin Godby and Molly Mounce, Kelly Milburn, Steven Kinder; middle column (top to bottom): Greg Allen, Beth Sneed; right column, Kasey Bardin and Stephanie McGowan. Collage courtesy Brooke Bartrug

With the announcement on April 20th that schools would be closed for the year, school communities across the commonwealth have been working to let seniors know they’re not forgotten. In Russell County teachers were already at work on a plan to honor their seniors, one that started four days before the governor’s announcement and was completed by the following Friday.

On Thursday, April 16 RCMS teacher Brooke Bartrug was trying to find a way to honor her son, Caleb, and his classmates, something that could engage the community and bring back that sense of togetherness. She found it online. “I’d seen some adjacent school districts people had been delivering signs to the front yards of students,” Bartrug said. She set about contacting people she knew in the high school who had ordered signs before looking for guidance on how to put together a campaign to get yard signs out to the RCHS class of 2020.

“One of my friends, Lou Ann Flannigan, said ‘Why don’t we just raise the money?’”

They did the math on the signs and figured that in order to procure signs for each of RCHS’s seniors they would need to raise $1,650. Additionally, neither woman had access to the information about RCHS seniors, so they contacted Russell County Schools Superintendent Michael Ford about coordinating efforts to ensure that the students could get the signs once they were ordered in, “that was something we needed the schools to support us in and they did 100 percent.”

Lou Ann created a GoFundMe account to raise the money and they began sharing the page across social media.

One person whose eye was caught by the GoFundMe page was Jessica Gossage, whose husband Darren is the principal at RCHS. Jessica does a lot of business with sign making and was able to get the signs in at wholesale cost, bringing the amount needed down to $1,450.

“Within 27 hours we hit our goal,” Bartrug said.

With the goal hit by the evening of Friday, April 17 the signs were ordered, and a plan had to be put into place to get the signs delivered to the students.

“Darren reached out to me to see if his teachers could be the ones to do the delivering of the signs,” Bartrug said, “and I thought that was a very special touch to allow these teachers that had so recently been teaching these seniors to be the ones to deliver the signs.”

One week to the day that the signs were ordered they were out on the lawns of RCHS students, delivered by their teachers, coaches, and librarians completing a journey that proves that even in the face of pandemics and social distancing communities can still come together in support of one another.