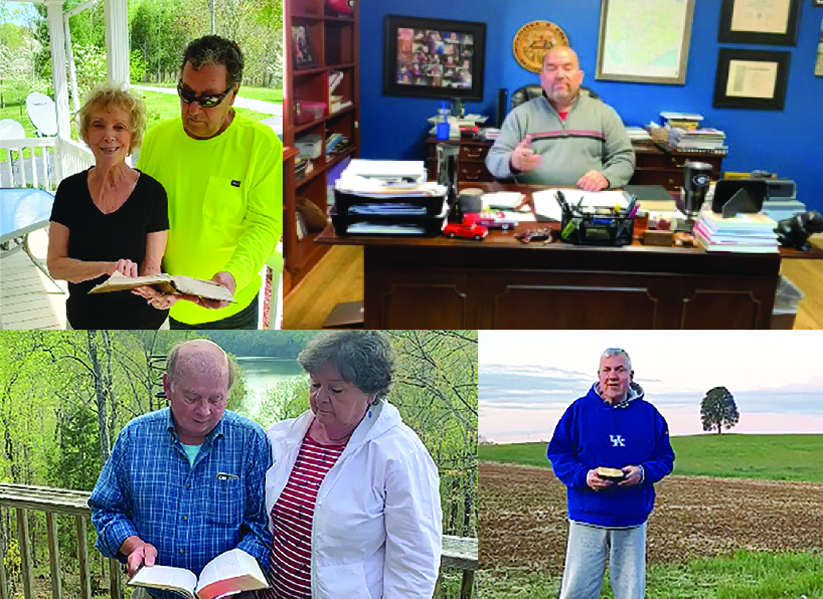 This is the continuation of a series of weekly articles featured in the Lake Cumberland Current about how churches in Russell County are adapting to the social distancing restrictions brought on by the coronavirus pandemic.

As we round through our sixth week of social distancing, points of contact between people are becoming all the more precious. Communities, families, and church families alike continue to reach out as they can, and at Jamestown First Baptist Church more and more people are getting into the game.
If you visit their Facebook page, you will see videos of Bible studies and services, but you will also see people and families chipping in and sharing scripture with one another.

“My wife was the one who came up with the idea to have members of all ages to share one of their favorite Bible verses,” said Pastor Scott Russell of Jamestown First Baptist. The idea was to for people to choose verses that were uplifting, or a source of strength for them and to share that strength with each other. “It is an unusual time and the words they say may encourage someone who may be feeling isolated or depressed.”
Individuals and families have jumped on, creating a web of support and engaging in a project of faith that, while at a distance is still collaborative in nature.
“It’s been amazing the number of likes and people who are watching not only in the area, but also across state lines and even oceans people from all over are watching. That part is great,” he said. “My concern and the concern of several of my fellow pastors is that some of our senior adults are missing out on that.”

A concern at not only Jamestown First Baptist, but also at many other churches is how to reach senior members, many of whom either do not have smartphones or don’t have the training to understand how to make the best use of them.

Fortunately, those members are still being ministered to and cared for through volunteers among the church community.

“We have several elderly people that people from the church check on. They call them and check in on them and bring them food,” Brother Scott said.

The needs of the elderly members were not new, so Jamestown First Baptist already had people in place before March 13 to look after their older members. “Our people were already good checking in on them, helping with food is the more recent work. These people are shut in, they can’t go out anywhere, and they need to be protected them from this sickness, so we began bringing food to people as soon as this started.”

Even considering the relative size of the church and the help in place, an additional five to ten people have also jumped in to add to the efforts at the church.

Among the more permanent changes will be the continued expansion in broadcasting of services from the church. With Sunday worship services on DouCounty every Friday morning and the addition of their Facebook Livestream, Jamestown First Baptist Church it’s now easier than ever to access their worship.
“I’ve spoken with several pastors I can see that all of us continuing on with Facebook Live and YouTube from now on because you’re reaching more people. It’s not a hard setup all we do is turn a phone sideways and zoom in.” That is not to say that the online services fill all the needs of the people.

While every pastor has had their own response to preaching in an empty sanctuary, they have all been consistent in missing the interactions with their people. “One pastor said that he missed the people being in the sanctuary because that helped motivate him,” Brother Scott said. “I miss the people. The hugs, the handshakes, smiles.”

But through the hardship and distance there have been rays of hope for the time beyond now. “I’ll be glad when this is over, but at the same time this is helping us to be more creative, to be more intentional. Like I’ve said, people who don’t normally go are watching online and getting engaged.
“I was reading a scripture the other day (I have a Bible study Wednesday night at six) and one thing the Lord impressed on me that people need to hear is that God cares for us and what that means is that God is personal and personable and He’s going to care for us and he’s going to use other people and family for that.

“Our culture is basically selfish and individualistic, and this has made us come together and be a family again even though it’s different, even though it’s weird. You can’t touch anybody, but it’s still bringing people together.

“I just want people to hear that God cares for us He’s going to take care of us so we don’t have to be afraid or stressed and we can try to learn something.”
Among the things Brother Scott and others have learned is that “this makes us appreciate nurses and doctors, service people and those that are taking care of us in the grocery store who are putting their lives on the line.”