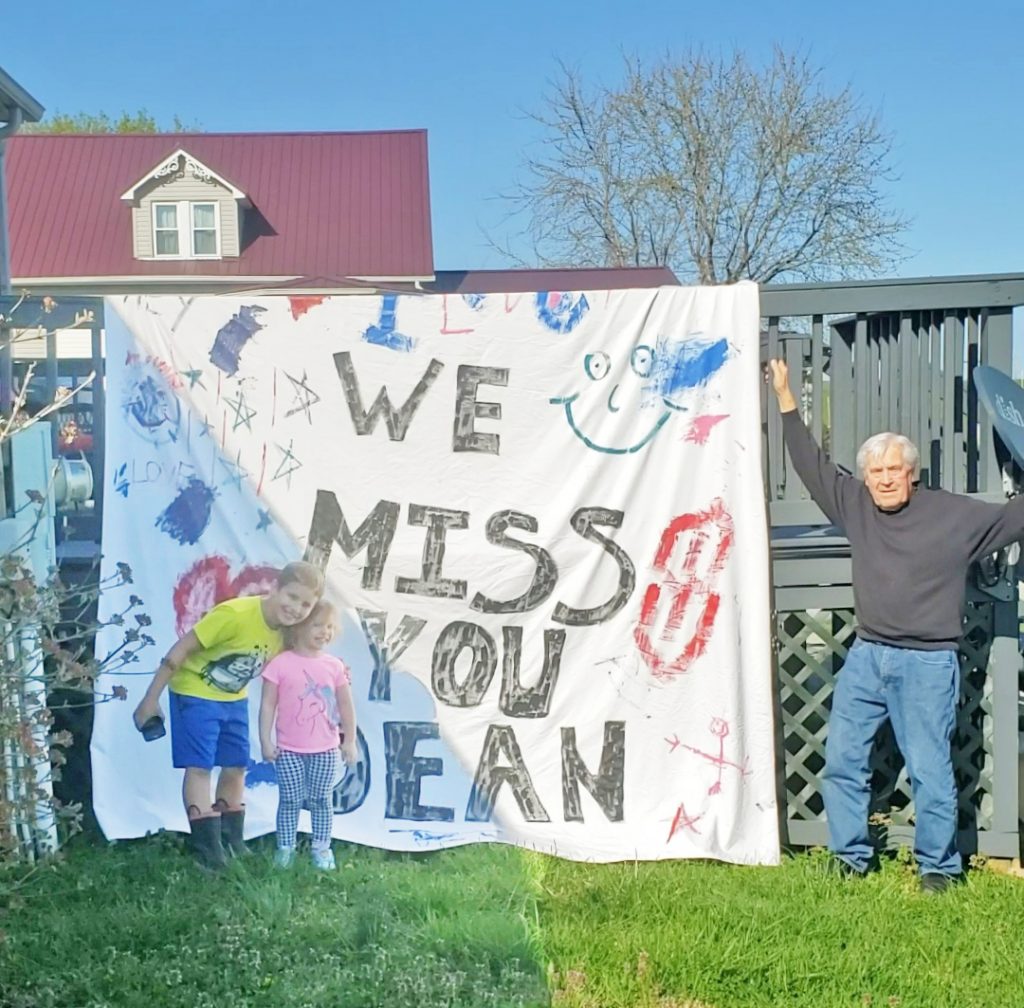 Grayson Moran, left, and his little sister, Navy, pose with the sign the family made for their neighbor Dean Mann, right. Photo by Crystal Moran.

Friendships come about naturally, organically. Kids’ friends are mostly made up of kids around the same age. They meet in school or playing team sports, or by simply living on the same street. In the case of Grayson Moran, the friend he made on his street is just a little older than might be expected.

Grayson’s family moved into their house about three years ago. When they were first looking at the home, a neighbor came over in his golf cart and introduced himself. The neighbor was Dean Mann. Dean is now 84 years old. Grayson (Gray to his friends and family) is eight.

“From day one, he has been such a great neighbor. The day we moved in, he showed up out of the blue to help us move stuff into the house,” said Crystal Moran, Grayson’s mother. “In the three years we’ve been neighbors, he and Gray just hit off and have become great friends.”

Crystal said they have a very sweet relationship. They see each other quite often and Gray has come to really enjoy Dean’s company. “They do all kinds of things together. Last summer, Dean even helped Gray learn to ride his bike. Dean even got on the bike and rode it down the hill to show Gray how to do it.”

Gray really likes Elvis and a lot of other things that came about long before his time. It is one reason the two have bonded like they have. Dean was born the same year as Elvis and he tells him stories about “the good old days.”

Crystal and her husband James also have a daughter, Navy, who is three. Crystal says that Dean is great friends with both of the children, but at her age Navy can’t go out to visit like Gray does.

Once school was canceled, Gray’s visits with Dean stopped because the family didn’t want to risk any health issues for Dean as he is in the most vulnerable age group for COVID-19. It hasn’t set well with Gray.

“He got upset and there were some tears,” said Crystal. “Every day Gray would ask if he could go see Dean and I would have to explain again why he couldn’t. Then last week, he got upset and said he was afraid Dean would forget about him and forget who he was.”

The family came up with a way to let Dean know they missed seeing him. They made a big sign they could hang on the deck at their house in a spot that Dean could see and know they were thinking about him, and she reassured Gray that he wouldn’t forget about him.

The family made the sign and waited. Later that day, Dean was out in his golf cart picking up limbs from his yard. This was the perfect time to hang the sign for him to see.

“When he saw it, he just stood in his front yard waving both of his hands like you do when trying to flag down a car, letting Gray know he could see it. Then he got in his golf cart and began to drive over. I was telling him not to come over or get too close, but he came on over and he was laughing the whole way,” said Crystal.

Dean wanted a picture of himself with Gray and Navy and the sign. Making sure they stuck to the social distancing recommendations, they stood on opposite sides of the sign to get a picture. Crystal said that Dean loved the sign and how much it showed they were thinking about him and wanting him to be ok.

Then on Saturday, another neighbor was having his yard mowed, but the mower broke down. James and Dean each went out to help load the mower back up. But Dean brought a bag out with him.

Crystal laughed when she saw it. “It was a big trash bag full of food like chips, cookies and hot chocolate. He had written on the bag ‘Grayson’s Bored Bag’ because he’s always saying he bored.”

The pandemic in the state and country has caused many people to feel inconvenienced, upset or even angry. This pair is not letting it come between them. Grayson and Dean can’t hang out together for a while, but this friendship is one that will survive the separation.