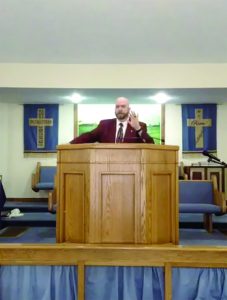 Brother Brian Fudge of Jamestown Church of the Nazarene preaches to his congregation through an iPad on Facebook live. Photo from the church’s Facebook page.

Contributor
This is the first in a series of weekly articles in the Lake Cumberland Current about how churches in the Russell County area are adapting to the social distancing restrictions brought on by the coronavirus pandemic.

This past Sunday churches across the commonwealth followed the directives of Governor Andy Beshear and closed their doors for normal service. Nearly all churches followed suit, shifting their worship online where they broadcast services on Facebook, YouTube, and elsewhere continuing their work despite the limitations.

“The challenge really was just getting everything started,” said Brian Fudge, pastor of Jamestown Church of the Nazarene. “It was kind of awkward, standing there being used to having a bunch of congregants to preach to and instead having to preach to an iPad.”

“Of course, my wife and two kids were there with me and that helped.” Once he was into the flow of things everything smoothed out. “We had a great response, the last time I looked we had over 1000 views and over 1300 people reached.”

Facebook was alive throughout the late morning Sunday with sermons and services from many churches across the area and the Commonwealth.

“Seeing God’s word go out in a different way, people being the church instead of going to a church,” Brother Brian said. “I’ve had great feedback on this, comments from people, several messages of appreciation. During these troubled times that’s what we need to do to reach out to people.”

Apart from the Facebook live broadcasts of the Sunday services, Brother Brian has set up a YouVersion with the Bible app to begin an online Bible reading and study program. The benefit of these apps and programs is that they can help people to connect throughout the week the way that normal Bible study or gatherings had before.  “It takes a creativeness to adapt to these days and times.”

While all storms do eventually pass, many of these online tools and services could become a permanent fixture at Jamestown Church of the Nazarene as well as at other churches.

There have always been people who through age or health concerns have difficulty attending services and the work going on now to refine these online tools may be carried forward to ease their access after able-bodied people are able to once again gather together.
“That’s something that I’m going to talk to my church board about soon I know several churches do that for people who are not able to attend,” Brother Brian said. “In this day and time with the technology that we have it’s easier to do that.”
This type of service has precedents going back through generations and generations of technology. “People used to record videos or burn a CD of the audio, but now people can join in and worship at the same time as everybody else.”